You are here
Home > Entertainment > A New Spin on a Christmas Movie: A Bad Moms Christmas 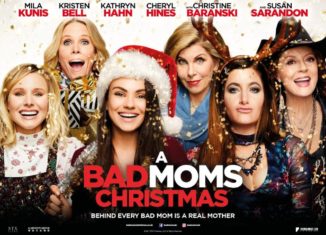 Bad Moms caught everyone’s attention with its exceptional characters, humorous scenes, and enjoyable plotline; it was no shock that a sequel would soon follow. Nonetheless, the standards were set pretty high for this sequel to the top the first one. After seeing the trailer, I highly doubted this movie would exceed the first one, yet I was proven wrong.

A Bad Moms Christmas is the perfect sequel movie for anyone (ages seventeen or older) looking for a good laugh. While keeping the entire audience in hysterics, A Bad Moms Christmas reminded its viewers of the importance of family, friendship, love, and forgiveness. Bad Moms depicts a storyline of a mother named Amy (Mila Kunis) who struggles to maintain a healthy relationship with her husband, keep up with her job, and raise her two kids in the right way. Along the way, she meets two other moms, Carla and Kiki (Kristen Bell and Kathryn Hahn), who struggle with a similar situation. As the three of them stick together and learn to keep a positive attitude, they learn that putting their kids above everything is what makes them truly good moms. This unstoppable trio worked together to show all of the moms at their kids’ school that making occasional mistakes is acceptable and loving your kids is what is most important.

The sequel came out on November 1st, 2017, and continued with a similar storyline, but this time the cast expanded to include Amy’s, Carla’s, and Kiki’s moms (Christine Baranski, Susan Sarandon, and Cheryl Hines). Throughout the movie, Amy, Carla, and Kiki struggle to keep up with all of the holiday expectations, while keeping their mothers intact. As the three of them reflected together on how much fun Christmas was as children and compared it to the stressful holiday it has now turned into, they decide to “steal Christmas back.” While Carla struggles to feel loved by her mother and Kiki struggles to have space from her mother, Amy has a clear problem with her mother lacking appreciation for everything she does and taking over the Christmas fun. Throughout the movie, the three moms struggle to keep their mothers intact during a stressful period of time, but all in all they always make sure to make their families a priority. This movie is the perfect blend between comedy, family, and romance. I would highly recommend this crowd pleaser for anyone (ages 17 and up) looking to fall out of their seat from laughter.