You are here
Home > Entertainment > A New Take on Full House 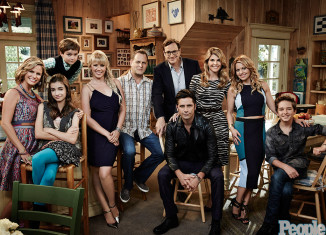 Everyone has been anxiously waiting for the release of Netflix’s new original series, Fuller House. This series is a spinoff of the 1987 classic

Full House, and it was set to include most of the characters that fans of the show came to know and love. Before the release of the show, however, it was announced that Mary-Kate and Ashley Olsen wouldn’t be joining the rest of the cast in the spinoff. Unfortunately for Full House fans, this meant that Michelle, along with her famous catchphrases, would not be back. However, Michelle is frequently mentioned throughout the entire series, and the return of the rest of the cast makes up for it in a big way.

Fuller House is the story of DJ Tanner-Fuller, Stephanie Tanner, and Kimmy Gibbler as they take on life as adults. The three work together to help raise both DJ and Kimmy’s kids. The director of the show, Jeff Franklin, did an excellent job in relating this new show to the original. He started with DJ having three kids, just like Danny did, and guess what? The youngest kids in both families were played by twins! Also, Franklin had Stephanie, the kids’ aunt, live in the house with them, just like Uncle Jesse did. Although it is not a happy one, another similarity between the two shows is that DJ’s husband died similar to the experience her father had when she was child. Next, he had the Fuller family living in the house that the girls lived in when they were little. He also included a dog in the family, named Cosmo, to pay homage to the Tanner family’s beloved dog Comet. Lastly, he included famous catchphrases and dances from the original Full House which made it that much more enjoyable.

Throughout the series, familiar faces, including, Danny, Uncle Jesse, Joey, Rebecca, Nicky, Alex, and Steve, all made special appearances. They all helped to bring the show together, and they allowed for people to reconnect with the family they fell in love with all of those years ago. In addition, new children were introduced to illustrate the changes that had taken place in both DJ and Kimmy’s lives. The new actors were definitely a crucial part in showing how DJ, Kimmy, and Stephanie’s lives have changed over the past years. There is definitely one thing that has not changed, though, and that is Kimmy Gibbler’s wackiness! If you want to see how the Tanner clan embarks on their new journeys, you are going to have to make your way to Netflix and watch this fun, warm-hearted series.