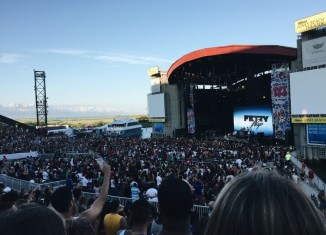 On Saturday, August 20th and Sunday, August 21st, the 2nd annual Billboard Hot 100 Music Festival commenced. Thousands of people from various age groups took a trip to The Nikon at Jones Beach Theatre to experience this two-day festival of music and fun.

The concert definitely did not discriminate amongst genres, as the performances spanned from singers such as Ariana Grande and Rachel Platten to rappers like Fetty Wap, J Cole, and Rae Sremmurd, and even to DJs like Galantis, Calvin Harris, and Martin Garrix. Ariana Grande showed off her sassy side while performing her new hit song “Into You,” while Fetty Wap got the whole audience to sing along with him to his hit song “Again.”  J Cole stole the show as he had the crowd dancing and singing for an hour straight.

There were a series of three stages that attendees were able to visit throughout the day. The more popular singers sang at the main stage, known as the “Hot 100 Stage,” while lesser known, yet still popular stars performed at the “Sun Stage” and the “W Hotels Next Up Stage.” In addition to these three stages, radio stations and DJs played music throughout the theatre and held dance competitions to keep everyone in high spirits.

While Saturday had beautiful weather all day and night, Sunday was hit with a heavy rainstorm at around 7pm. Although one would think that the rain would cause the concert to end, it actually made the concert better as it allowed everyone to cool down from the previously oppressive heat. Dancing and singing in the rain was a blast, but it definitely messed up my hair! The festival ended Sunday night with Calvin Harris and Designer, who successfully closed out two days worth of friends, music, and fun. All in all, the Billboard Hot 100 Music Festival was definitely a blast, and I hope to see you there next year!