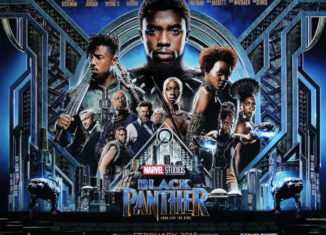 The movie takes place in Wakanda, home to the Black Panther, a.k.a. T’Challa (Chadwick Boseman). This is the Black Panther’s first leap off the comic-book page and into his own movie. The story was created in 1966 by Stan Lee (script) and Jack Kirby (art), and the original Black Panther first debuted alongside the Fantastic Four in an adventure in Wakanda. The city of Wakanda is powered by an unknown metal called Vibranium, the powerful metal that every nation wants. Many are willing to steal and kill to own it.

The best part of the movie is the amazing visuals and soundtrack featuring rapper Kendrick Lamar. The movie acknowledges the topic that no one seems to want to talk about in the film industry: race. Life in Wakanda appears deceptively normal on the surface, but when delving further into the country, you can see it for what it really is — a futuristic, nontraditional, technological, and mystical society where blacks rule a nation with great wealth, thanks to the priceless vibranium metal that they mine from their mountain. In fact, in order to hide the expensive metal and protect themselves from those who aim to steal it, their rulers hide the real city from the rest of the world in a thick forest, and only true Wakandians are able to see it. The rest of the world sees the country as poor and just living off of livestock and agriculture like the rest of Africa. With the country’s advanced technology, spaceships zoom over soaring buildings with thatched tops, a hover train that moves extremely fast so you can get anywhere in seconds, and progress everywhere including in impenetrable fighting costumes. One of the most beautiful scenes in the movie would be the sunset shown towards the end, reminding the audience of the beauty of Africa.

A divide between the people and Erik Killmonger (the movie’s villain), who turns out to be T’Challa’s long-lost cousin, can also be observed. Erik Killmonger’s emotional and traumatic backstory gives the movie more heft and real-world friction than any of Marvel’s other superheroes have done in the past. At its heart, Black Panther, like other adventure movies, turns out to be a father-and-son drama with an assassination, a struggle for power, and a somewhat reluctant heir. Throughout the movie’s intense face-offs, we see issues of ancestry, identity, the African diaspora, and the new world vs the old.

Michael B. Jordan was a terrifically charismatic villain in the movie. Mr. Chadwick Boseman (a Trinidadian like myself) had magnetism, and his performance was more physically restrained than Jordan’s. Boseman also provided moments of comic relief as well as action-packed scenes, including some hand-to-hand combat. Like many other Wakandans, he speaks in English with a South African lilt. After being crowned king of Wakanda, T’Challa is to become an international diplomat in the United Nations after becoming the successor to his father.

Race matters deeply in Black Panther in terms of being able to explore larger concerns about the past, the present, and the abuse of power. The emphasis on black imagination, creation, and liberation in the movie acts like an emblem of a past that was denied through human migration caused by slavery and a future that feels very present. It makes everyone, no matter what race they are, experience Wakanda differently. I’ve watched the movie two times and would highly recommend it to everyone.