You are here
Home > Entertainment > This Changes Everything Highlights Hollywood Issues 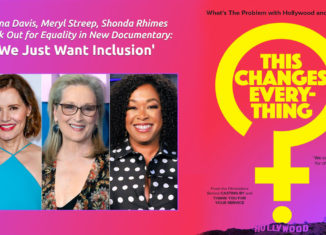 This Changes Everything is a bold, yet inspirational documentary that delves into the difficulties of gender inferiority in the film industry. The audience learns about the true stories of gender inequality experienced by several well-known actresses. I was fortunate enough to be invited to an exclusive assembly at Half Hollow Hills High School East where the documentary was featured and followed by a question and answer segment with the film’s own director and producer, Tom Donahue. Tom Donahue is widely known for his style in filmography of teaching his audience an important lesson and bringing an informative view to an important topic. He has won many awards for the several films that he has produced with The Changes Everything being his most recent production.

In watching This Changes Everything, the audience learns of the repetitive gender discrimination in Hollywood and the gender bias in the film industry in general. Although within recent times, gender inequality has improved, it still conjures great insufficiency in the filmmaking process. The documentary covers various facets, such as machismo, in addition to speaking about misogyny. It utilizes an interesting investigation of six women who founded the Directors Guild of America’s Women’s Steering Committee in 1979 to expose that women were treated as inferiors. Tom Donuhue further exposes misogyny by featuring the first-hand accounts of many of Hollywood’s renowned actresses, such as Meryl Steep, Shonda Rhimes, Sandra Oh, Reese Witherspoon, Taraji P. Henson, Natalie Portman, and Amandla Stenberg. These acclaimed actresses underscore the inconceivable depths at which they were treated and bring to light that even women who society finds the most prevalent were treated as menial by certain arrogant men.

Proceeding the viewing of This Changes Everything, the high school audience was able to ask Tom Donuhue some of the ideas that they had pondered whilst viewing the documentary. He spoke about the deep misogyny of men today and the extent to which, in some ways, it is worse now than it was in the past. Through answering the audience’s questions, Donahue also brought to attention the ideas that there truly is not a lack of information on this topic, but instead a lack in enough people to actually care about making a change for the better. He also went into depth about the impact of the “Me Too” movement and explained that the outcomes of this movement helped women speak up in the film industry today. Tom Donahue explained the traditional views that his family had on gender discrimination and that it was the impetus for him to create the films. His brother’s uncertainty on this topic inspired the documentary to be directed toward swaying the ignorant mind to believe the valid argument for which Donahue fights to present.

Overall, ignorant beings’ ideologies must be overthrown by strong feminist minds. After watching the interviews that composed the documentary and learning about the unsettling mysoginy in Hollywood, I can only hope that this will inspire future generations for females to overcome gender discrimination in the film industry. Tom Donahue thoroughly presented the audience of This Changes Everything with great evidence toward the implausible actions of a sexist society. His voice is poignant and timely. I highly recommend that you check out This Changes Everything; it just might open your eyes to what has been going on for years right under our noses in one of the biggest industries in this country.