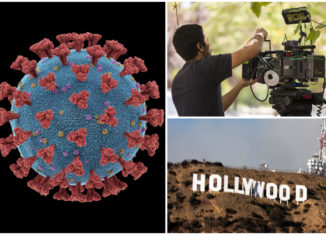 Watching television and movies has practically become a daily responsibility during this time in quarantine. There is nothing better than binge-watching a series on Netflix or watching every single Marvel movie in the span of a few days. The current crisis we all are facing, besides the pandemic taking over the world, is being left with cliffhangers in seasons of all different shows! Everyone is desperate for more episodes and more movies. However, the spread of the Coronavirus is affecting both the TV and Film industry not only in the United States but also in countries around the world.

Although it may not seem like it, shooting even one scene of a movie or television show requires the work of a ton of people in what can be a small space. In order to help end this virus, people need to be socially distant, which is hard to do on set. Movies’ success relies on airing in theaters and film festivals. One of the most prestigious film festivals, the Cannes Film Festival, has been postponed until a later date. Popular television series that people are desperately waiting for, like “Stranger Things” and “Succession,” has also been postponed in shooting. In countries like South Korea, shooting has begun for some series, like Netflix’s “Love Alarm.” On set, hand sanitizer and masks have become a new normal, and actors eat boxed lunches rather than from the lavish buffet tables. Makeup artists are using single-use applicators as well.

This idea is being pushed by some producers in Hollywood who want to get things up and running again. For many actors and workers on set that are not multi-millionaires, working on set is how they are able to make money to live; therefore, people in all facets of the industry are trying to push filming. On the contrary, some production studios do not foresee further production until after a certified vaccine. Even if there are new regulations set in place that will enable people to start filming again, delays still can occur due to having to either write new scripts in order to align with what is allowed to be shot or having to figure out how to do advanced special effects to create what was to be shot live.

Major companies, like Warner Bros, have been constantly updating changes. As of April 20th, the upcoming movie “The Batman,” has been postponed to be released October 2021, when originally it was supposed to be in June of that year. Other big movie corporations, like DC Films, have postponed upcoming movies as well. Disney, along with the movies produced under that moniker, also runs companies such as 20th Century Films and Searchlight Films, and therefore, they had to make lots of changes to their release calendar. While most of these changes are delays, on the bright side, Disney is releasing a filmed version of Broadway hit Hamilton to Disney+ on July 3, 2020, which is actually 15 months earlier than its original release date. While the same idea of postponing is being held by companies shooting television shows, thankfully, talk show hosts have been able to continue producing content from their own homes. Ellen Degeneres, Jimmy Fallon, Jimmy Kimmel, and more, are providing us with new content each week, which is definitely an upside to the circumstances.

Despite all the rapid changes in this industry, one thing will always stay constant: the show must go on! Although it may take time and effort, film and television are two important aspects of modern culture and therefore will never die, even in a time of crisis like this.