You are here
Home > Entertainment > Danger Sings in Stranger Things 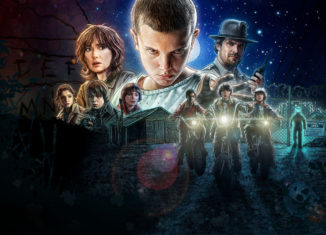 By Rachel Penzer and Sophie Kreit

Nostalgia from past decades has always succeeded in capturing the attention of millions of viewers throughout the nation. And, with the aid of online streaming services like Netflix, Amazon Prime, and Hulu, accessing appealing programs has become even easier to those who don’t want to grasp onto a cliffhanger after each episode. This past summer, Netflix and the Duffer Brothers released Stranger Things, an ‘80s riddled masterpiece filled to the brink with familiar sci-fi references and even appeals for younger audiences, including children in the cast to induce relatability.

As many science fiction ‘80s movies once did, Stranger Things features offbeat personalities in an effort to emphasize the uniqueness of the universe they have created. Similar to E.T.: the Extra-Terrestrial and Stephen King films, like Carrie, the show doesn’t only focus on nerds and misfits. Stranger Things includes more typical characters as well, depending on archetypes like “the mean girl” and “the popular guy,” all while making each character three-dimensional and unique.

The series consists of only eight episodes and takes place over only about a week, making the story concise and without any plot fillers, while leaving the audience wanting more. Stranger Things has proven to appeal to various audiences. The fact that the story in set in Indiana in the ‘80s incites nostalgia in those who grew up in that decade; however, the majority of the series takes place from the point of view of children and adolescents, so the story can also be understood and appreciated by younger audiences.

Viewers need to be aware that the presence of main child characters does not make the story entirely kid-friendly. A few relatively mature issues are brought up throughout the plot, but most of all, the series has a very eerie vibe to it. Without spoiling the plot, it is safe to say that Stranger Things is not technically classified as a horror series, but it does contain some creepy elements. This may make it more suitable for more diverse audiences. People who cannot withstand horror shows or films will likely still enjoy it because it is more mysterious and interesting than scary, and it contains underlying humor throughout much of the series. Much of the events that take place throughout the plot are noted as scientific rather than unexplained.

The series’ casting is outstanding. Actress Winona Ryder is in a role more emotional and dark than she has ever played despite her involvement in cult classics of the 80s and 90s. The cast additionally includes wildly talented child and adolescent actors, including Natalia Dyer, Finn Wolfhard, Caleb McLaughlin, Gaten Matarazzo (who has been seen in Broadway shows Priscilla, Queen of the Desert and Les Misérables), and the twelve-year-old girl who has become the face of Stranger Things, Millie Bobby Brown.

While the season finale was seen by many as weaker than the rest of the series, it did end with a cliffhanger that left the audience wanting more. Not surprisingly, it has been renewed for a second season on Netflix coming in the near future. Although no official release date has been set, the series is rumored to continue around early summer 2017. According to co-creator Matt Duffer, season two will cover the repercussions of the events that took place in the first season. The series can be enjoyed no matter what genre peaks your interest because Stranger Things contains something for everyone.