You are here
Home > Entertainment > Dear Evan Hansen: A Representation of Today 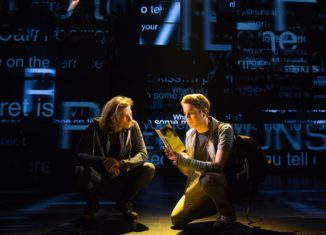 Broadway theaters are a place to tell stories and send messages to audiences. Millions of singers, dancers, actors, and actresses have performed and left their mark on stages all over New York City. While many Broadway shows retell classic stories, such as The Lion King, Mary Poppins, and Matilda, few introduce viewers to new narratives that are relevant to current times. Dear Evan Hansen is a new Broadway musical that addresses many issues relevant in today’s society including suicide, anxiety, and the impact of social media. The show helps to convey many important messages and is successful in showing how many people can be affected by one person’s actions.

Dear Evan Hansen is directed by Michael Greif and stars some of Broadway’s finest. Ben Platt, Laura Dreyfuss, Rachel Bay Jones, Jennifer Laura Thompson, Mike Faist, Michael Park, Will Roland, and Kristolyn Lloyd all star in the production. While the cast may be small, only eight people to be exact, they are still able to tell a moving and emotional story. Ben Platt plays the main character Evan Hansen. Platt has appeared in various roles on Broadway but is best known for his role as Benji in Pitch Perfect and Pitch Perfect 2. Platt did an incredible job in portraying this eclectic character, and his vocals throughout the entire production were superb. The rest of the cast also did a great job in expressing the emotion and personality of their specific character. Not only was the show filled with a memorable story and entertaining cast, but there were empowering songs and dance moves that helped to tie together the whole story. The songs ranged from emotional ballads to upbeat tunes.

Dear Evan Hansen is a heart-warming, yet melancholy production about a high school senior named Evan who struggles with anxiety. This anxiety disorder prevented Evan from making friends, and as a result, he did not fit in well at school. In order to build his self-esteem, Evan wrote notes to himself about what he was feeling: “Dear Evan Hansen, today is going to be a great day because… Sincerely, Me.” Unfortunately, one of Evan’s notes gets into the wrong hands causing Evan to get tangled up in the life of a grieving family and in a lie that should have never been told.

The show helps to illustrate problems that many teenagers face today. It portrays the thoughts that go through people’s minds when they feel alone and not cared about. It demonstrates how prominent social media is in our lives today by showing how quickly one tweet or one post can be seen by millions of people. Finally, it leaves people wondering about how they can make a difference in society. I would recommend this show to people who want to see a production where they feel connected to the lives of the characters and want to see how Evan Hansen handles his own reality. This is a story that should be told to people of all ages, and this cast and crew did an excellent job of telling it.