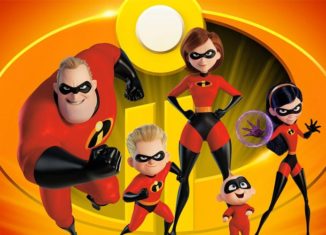 On November 5, 2004, Disney and Pixar Animation Studios released The Incredibles. It told the story of a family, the Parrs, and how they saved the world from the evil villain Syndrome. It earned an estimated $631 million at the box office and was one of the best kids’ movies that year. After its release, kids and families couldn’t wait for a sequel. Finally, fourteen years after the original movie premiered, The Incredibles 2 came to theaters.

The film takes place immediately after the ending of the first movie, so for those who haven’t seen the original, it would be pretty helpful to do so before viewing the sequel. The plot of the movie is simple. After the Incredibles fail to stop the Underminer, a man approaches the family about wanting to make superheroes legal again (they were made illegal in the first film). He chooses to use Helen Parr, a.k.a. Elastagirl (voiced by Holly Hunter), to be the face of his movement, leaving Mr. Incredible (voiced by Craig T. Nelson) to be a stay-at-home dad. Besides having to fight occasional crime, Mr. Incredible had to deal with their newborn baby whose powers were still being discovered. Eventually, the entire family is called upon once again to save the world from the evil Screenslaver.

The movie was quite enjoyable. It had a very fun and kid-friendly tone that allowed it to appeal to all audiences. Additionally, the script was crisp and delivered its punchlines with excellent timing. Disney-Pixar also used the fourteen-year gap between the two movies to their advantage. Knowing that they would have a mix of teenagers and young adults who were kids when the first movie came out, as well as young kids experiencing the Incredibles for the first time, they were able to keep the tone light while sliding in jokes that would be funny to older audiences as they went over the heads of younger fans.

The advancement of technology was also evident in the film. The animation was clean and had only improved since the original was released. The action and explosions gave an almost comic-esque feeling to the scenes as if the heroes jumped straight from a comic’s pages.

Overall, the movie was a huge success. It earned $180 million in its opening weekend, with worldwide earnings estimated to be around $500 million. Disney-Pixar knew exactly what the audiences wanted, and delivered a fun and entertaining film that runs for just under two hours. If you haven’t seen it yet, what are you waiting for?