You are here
Home > Entertainment > Fashion Week Comes to NYC 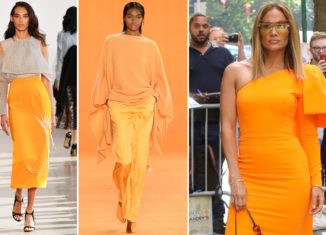 This year’s New York Fashion Week began on February 4 and ended on the 12. It was held at various elegant locations across NYC, such as the Manhattan Center and Skylight Clarkson Sq. At this fashion week, the public was presented with the upcoming fall lookbook from various designers. According to those participating designers, a major trend that will be seen this upcoming fall is cape crusaders. These exaggerated capes with draping fabrics really stood out on the runway and are ready to go for the streets of New York City this upcoming fall. Micheal Kors and Proenza Schouler are just some of the designers that will be taking part in this new trend. Another popular look for this fall is the orange crush color. The upcoming season is placing a huge emphasis on vibrant, lively, and vivid color. Among the brands using shades of orange in their fall and winter 2020 runway collections were Jonathan Simkhai, Carolina Herrera, and Sies Marjan. Another popular style is the incorporation of floral patterns in dresses, blouses, skirts, pants – you name it, it has flowers on it! This adds to the vibrant lookbook making fall as positive as possible.

More important than the clothes, the event brought people together smiling and dancing while sharing their creative styles. Unfortunately though, due to social media, the show had a smaller turnout than expected with brands only showing up to the big shows in Milan and Paris. Last season, the Council of Fashion Designers of America (CFDA) advocated for new changes including cutting the week down to five days, but this was not initiated for this year’s events. Hopefully, in the years to come, more brands will attend and bring the energy back into runway fashion.