You are here
Home > Entertainment > The Fast Food Drive-Thru:A Model for Social Distancing 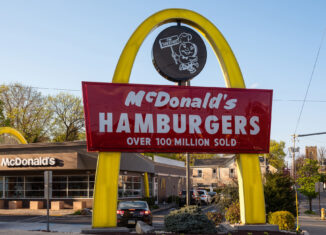 After World War 2, America had a whole new idea about fast food. The creation of the drive-thru changed the way Americans ordered and picked up fast food. The first fast food drive-thru was created in 1947 at Red’s Giant Hamburg. Located in Springfield, Missouri on Route 66, Red’s Giant Hamburg was not your ordinary diner. Red Chaney (the founder of Red’s Giant Hamburg) developed the first-ever drive-thru window to order your food. This diner offered an intercom speaker as you drove up to the window to order your food. In Irvine, California in 1948, Harry Snyder opened the first In-N-Out Burger and introduced a new two-way speaker box as you drove up to order, pay, and pick up food. This system allowed customers to even stay in their cars while they paid. We all know McDonald’s as one of the biggest fast food chains, but it was not until 1975 that Mcdonald’s created its drive-thru option.

When we fast forward from when drive-thrus first started to now, they have come a long way.  It simply began as a way to not leave your car and just have someone open a window and give you your food. Before drive-throughs, customers would park their cars, and food would be brought out to them. Now even non-burger food chains, like Starbucks, have also implemented the drive-thru gaining millions of customers per day. There are also apps like Doordash and Uber Eats that pick up your food and deliver it to your door. Fast food restaurants also have online ordering services that allow you to order online and have it delivered.

Drive-thrus have taken on a whole new meaning during Covid-19. Fast food drive-thrus were originally created for the ease of getting food and eating it in your own car or your own home. During the pandemic, this became a necessity. Drive-thrus allow you to get the same great taste you crave while remaining safe. The Drive-up window allows a contactless payment and contactless serving of food. The fast food chain Miami Grill, based out of South Florida, is now leaning towards the drive-thru and mobile style of food delivery, according to SunSentinel.com Sun Sentinel shares that “It’s a checkers-size building with two drive-thru lanes, a walk-up ordering window and waiting for spaces for customers who order through the restaurant’s mobile app. There’s no dining room… the company says the model should be well-suited for the post-COVID-19 quarantine era, as many consumers will likely avoid dining out until a vaccine is developed.” During this pandemic, most restaurants have limited dine-in seating allowing drive-thrus to serve more customers than usual and making them a real money maker.

It is often said that necessity is the mother of invention, and this is how the drive-thru was born. Red Chaney is no longer around to see how his original drive-thru creation has been used for purposes he could only have dreamed of – safe delivery and tasty food during a worldwide pandemic and to keep business going and customers safe as a necessity.  This pandemic has truly been a lesson in efficiency. According to The New York Times, “many people have started treating drive-thrus like grocery stores, making only occasional trips but placing larger orders.” Not only fast food restaurants but also common dine-in restaurants have been offering curbside pick up, the fine dining take on drive-thru.

Over the past year, different parts of the world have been essentially shut down. As a result, most people leave their homes much less than they used to. Fast Food drive-thrus and new adaptations of the same concept have offered the dining out option to people in the face of great adversity.