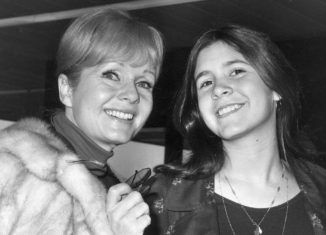 Ever since Carrie Fisher reached the screens of televisions all around the world in 1969, she left an impression on audiences everywhere. Sadly, on December 27, 2016 the world suffered a tragic loss as the entertainment icon was pronounced dead at 8:55 on that Tuesday morning. The actress suffered from a heart attack while on a flight from London to Los Angeles about 15 minutes before the plane was supposed to land. Paramedics were immediately called and Carrie was transferred to the UCLA medical center where she was placed in the Intensive Care Unit. The exact cause of her death is still listed as cardiac arrest, but the underlying causes are still unknown. Luckily for Star Wars fans, Carrie will be making one last appearance as the iconic Princess Leia when Episode VIII debuts in theaters in December of 2017. Carrie Fisher will deeply be missed by her loved ones and fans all over the world.

Shortly after Carrie’s death, the world received more depressing news as Carrie’s mother, Debbie Reynolds, was pronounced dead. Reynolds died on December 28, 2016, only a day after her daughter. Her death is believed to be due to a stroke caused by an immense amount of stress brought on by her beloved daughter’s sudden passing. While organizing Carrie’s funeral, Debbie complained about breathing problems, and at around noon that same day, suffered a fatal stroke. The star was transported to Cedars-Sinai Hospital where she was treated by the best possible doctors, but there was nothing they could do. Like her daughter, Debbie Reynolds was an entertainment icon who celebrated over 65 years of a career in Hollywood. Her fans will always remember her presence and good-willed spirit. Both Debbie’s and Carrie’s legacies will continue to live on for years to come as they are survived by Todd Fisher, Fisher’s brother and Reynolds’ son, and Billie Lourd, Fisher’s daughter.