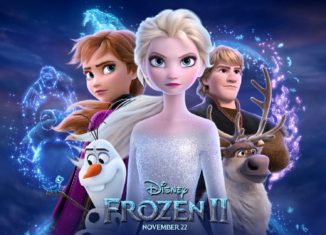 Six years later, one of the most loved Walt Disney movies of all time, Frozen, returned to theaters on November 22nd! The voices behind Elsa (Idina Menzel), Ana (Kristen Bell), Kristoff (Jonathon Groff), Olaf (Josh Gad), and Hans (Santino Fontana) all reunited with their beloved fans for this highly anticipated film release. In the previous film, Elsa struggled to preserve her kingdom while juggling her newfound abilities. Ana, Olaf, Kristoff, and Sven all supported her reign by preventing the malicious Hans from his tyrannical rule over Arendelle.

As all Frozen fans know, the crew was able to overrule this potential dictator. The movie introduces itself with a scene of Kristoff, Elsa, Ana, and Sven spending quality time together when a voice from the north catches the attention of Arendelle’s residents. Mystical spirits led them out of their homes and towards the mysterious destination. The snow queen’s ambition drew her towards this anonymous voice. Her loyal friends joined her on yet another journey to untangle this enigma. They followed it to an enchanted forest where Elsa soon learned that her powers are somehow associated with this mystery. The forest was surrounded by an impenetrable mist that disabled Elsa’s capabilities. It soon came to the sisters’ attention that they were the only ones that could save the fate of their cherished home. While they were fighting for all of Arendelle, its history as well as the truth behind Elsa’s powers began to unravel.

While the overall reception of this film has been good, the sequel unfortunately left many Frozen fans unsatisfied. However, Disney’s natural ability to incorporate magical soundtracks and abstract, emotional story lines made the movie successful in a different way than the last.