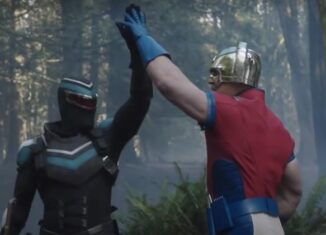 James Gunn does it again. The writer/director, known for his unique style and soundtracks, has made projects such as Guardians of the Galaxy and The Suicide Squad. Now, he uses his flare to create Peacemaker, a show based off John Cena’s character in Gunn’s 2021 Suicide Squad success. With the overwhelming amount of superhero projects releasing, whether it be from Marvel Studios, DC, or even Amazon Prime’s The Boys, some people claim they’re starting to feel “superhero fatigue.” Luckily for them, Peacemaker completely blows that “fatigue” away. While the show is raunchy, hilarious, and completely bizarre, it also has extreme heart and very likable characters. The show doesn’t shy away from important social issues either. There is commentary on racism, police brutality, and internet misinformation which is written in a very clever way by Gunn.

The series follows Christopher Smith, better known as Peacemaker. He’s a homicidal maniac of a character with deeply rooted daddy issues and a patriotic sidekick named Eagly. Yes, Eagly is literally just a bald eagle, but he is also Chris’ best friend. When an alien invasion known as “Project Butterfly” shows itself as a threat to earth, Chris is recruited by the mysterious Clemson Murn to take down the Butterflies. Murn’s team consists of John Economos (Steve Agee), Emilia Harcourt (Jeniffer Holland), and Leota Adebayo (Danielle Brooks). Along the way, we meet the hilarious Adrian Chase, aka Vigilante (Freddie Stroma), officers Song and Fitzgibbon (Annie Chang and Lochlyn Murno), and someone who may be one of the most unlikeable characters of all time, Peacemaker’s father, Auggie Smith (Robert Patrick). Known as the White Dragon, Auggie Smith is an alt-right neo nazi who makes you yell at your TV screen with every racist remark that exits his mouth. Of course, this is intentional and offers some great opportunities for the show to explore topics such as racism and prejudice, making good commentary on our society today.

At the moment of this being written, the show has aired 6 out of 8 episodes. With a majority of it out, it’s safe to say that Peacemaker will end up being an amazing series. It definitely is so far, and knowing James Gunn’s talent, these last 2 episodes will not disappoint. Whether you’re a fan of the superhero genre or not, this show will no doubt keep you entertained for the whole ride. It truly offers such a range of feelings for any viewer. If you start the show and want to watch an opening theme that features the entire cast doing a dance number to Wig Wam’s  “Do Ya Wanna Taste It”, followed by an alien gorilla getting cut in half with a chainsaw, ALSO followed by more f-bombs then you have ever heard in your life, you will be satisfied. At the same time though, if you start the show and want to see emotional moments between Danielle Brookes’ Leota Adebayo and her wife Keeya (Elizabeth Faith Ludlow), or heartfelt friendships between characters and deeply emotional backstories, you’ll be equally satisfied. The way the show has moments that are so grounded in reality, but in the next scene features a bald eagle fighting off aliens truly amazes me and makes for an insane watch. Peacemaker truly offers something for everyone.