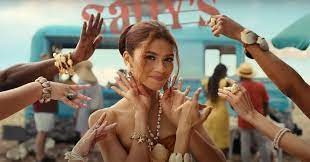 Every year, all of our family and friends gather around the television screen, waiting for the annual Super Bowl to start. Not only do we get to enjoy prime entertainment as we watch our favorite teams tackle and score touchdowns,           We also get to appreciate the hard work and dedication that numerous top-notch brands put into filming commercials periodically throughout the game. For as little as 30 seconds, companies pay almost as much as $7 million! Brands not only receive notable recognition from their commercial segments, but they are also very entertaining for viewers worldwide. You may ask,“How exactly do they achieve this goal?” Today, I will be providing you with more insight on the development of Super Bowl commercials, specifically in 2022.

One advertisement in particular stuck out to most viewers and created a large amount of buzz; Coinbase. The ad simply included a black screen with a colorful QR code which bounced around the screen, just like a DVD or computer screen saver. When scanned, the QR code took you to the cryptocurrency company’s website. The ad led to as much as 31,000 tweets, 250,000 engagements, and 207.5 million potential impressions. In fact, it was almost too successful; the site crashed during the game! Another commercial was for Chevrolet’s “New Generation.” The commercial related to a show called The Sopranos. They brought back Tony Soprano’s daughter, Meadow, to Chevrolet’s spot. Sigler drove an electric Silverado playing the show’s original theme song “Woke Up This Morning”. At the send, Sigler meets up with AJ. In addition, Scarlett Johansson and Colin Jost teamed up with Amazon to imagine a world where Alexa could read your mind. There were many humorous elements in this commercial, for example, when Johansson woke up close to Colin, Alexa added mouthwash to the grocery list. This commercial not only gave everyone a good laugh, but also showcased the power and quality of technology that the Alexa possesses. Lastly, one other commercial was for Squarespace featuring Zendaya. Squarespace is a website builder that puts a spin on “Sally Sells Seashells”. Zendaya plays Sally, a seashell seller who has a hard time launching her business. After she launches a website using Squarespace, she expands her business even further and enjoys many excursions. Not only was this a fun concept, but Zendaya, who is overwhelmingly popular right now considering her star role in Euphoria, certainly helped out in gaining a lot of attention for Squarespace. This year, many companies put fun twists into their commercials which overall resulted in a huge success. Hopefully next year, and in the future, we can continue to enjoy these commercials surrounded by our loved ones every year.