You are here
Home > Entertainment > Jess Glynne: I Cry When I Laugh Tour 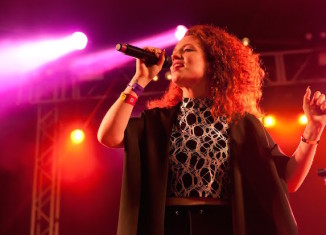 On Wednesday, January 20th, fans at a sold out grand ballroom at Webster Hall in New York City were anxiously waiting for Jess Glynne to begin her next stop on her “I Cry When I Laugh Tour.” Lucky for me, I was in attendance! While you might not recognize Jess, you’ll certainly recognize her voice. Her vocals are prominent on Clean Bandit’s Grammy-winning song “Rather Be,” as well as hit single “Hold My Hand.” Jess is just breaking through here in the United States, but she is a massive pop star in the United Kingdom. Across the pond, she is tied for having the highest amount of number one singles for a British solo artist. After Jess was featured on various songs, she finally released her own debut album called “I Cry When I Laugh” on August 11th, 2015 in the UK. It soon reached number one on the charts. The album was released on September 11th, 2015 in the United States, reaching number 25 on the charts (I highly recommend this album; it might have been my favorite album of 2015). Jess decided to name her debut album “I Cry When I Laugh” because she is very honest and wanted the album name to be a fact about herself. In the fall of 2015, Jess embarked on the “Ain’t Got Too Far To Go” tour in support of her debut album. The “I Cry When I Laugh Tour” is also in support of her newest album. The tour is scheduled for stops all over the United States before it makes its way over to the United Kingdom.

Now, onto the show. When I got to the venue, there was already a decent line forming. Luckily, I was able to be in the first row. It was so awesome to be up close and personal with Jess. After a bit of waiting, the lights went dim, and the show began. First was the opening act: Conrad Sewell, an Australian singer who is an up and coming star in the US music industry. He performed songs from his EP. Conrad did a great job on stage and got the audience pumped up and ready for Jess. He did an amazing job interacting with the audience, while he was performing. My favorite song from his set was “Hold Me Up.” After Conrad, it was time for Jess. As the lights began to go dim again, the introduction to the song “Strawberry Fields” began to play as Jess walked out and immediately went straight into “Ain’t Got Too Far To Go.” From the moment Jess walked on stage, I was mesmerized. She has such a strong stage presence. Last year, Jess had throat surgery for a possible career-ending vocal injury. This was not evident at all during her performance. Jess sounded better than ever! Jess had an 18 song set, including her encore. My favorite song from her set was “Take Me Home.” It is a slow ballad where Jess really conveys so much emotion; it was just her and a piano. Her raw vocal skills are unreal. Another one of my favorite songs of her set was her hit, “Hold My Hand.” It was basically one giant sing along dance party. Jess could feel the energy in the crowd. She was constantly smiling and telling us how we were so lively. At one point during the concert, Jess even said “I think this is one of my favorite gigs ever.” Well, Jess, it was certainly one of my favorite gigs too, and I’ve been to a lot! I 100% reccomend seeing Jess on tour if you get the chance; her show is truly unforgettable.