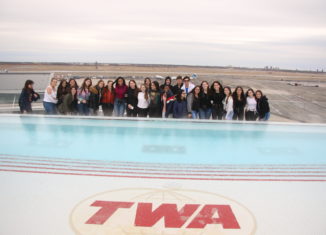 Tracy Turnblad, from the iconic campy comedy Hairspray, once said, “Hey mama, welcome to the sixties.” Once you walk into the TWA Hotel, located at JFK International Airport, that song will forever loop in your head. The TWA hotel brings you through a time machine and into a whole other decade.

This year, Mrs. Uttendorfer and Ms. Pakula’s multimedia design and photo classes took a trip to the unique hotel. The building is located within the gates of the John F. Kennedy International airport, but airport guests are not the only people traveling to see it. The TWA Hotel is filled with history related to aviation, giving credit to its namesake, Trans World Airlines, which took Americans to the skies and all over the world for the better part of 70 years. When walking past the walls in the building, beautiful patterns change within every room, putting your mind at ease. It’s no wonder that tourists from all over the world have been rushing to get here.

During the field trip, the classes learned about the one of a kind architecture, and the effort it took to design and develop this masterpiece of a hotel. Each room represents a different part of the 1960’s.From record players, old fashioned cars, and typewriters, to fifty shades of yellows, oranges and beyond, everyone felt like they were in a time warp. Although there were many little things that stood out within the hotel, the two big show stoppers were the old fashioned flight board and the airplane bar! The airplane bar was specifically astonishing because students were able to see the style and layout of a plane in the 1960’s. In addition, it gave a new perspective on the many advancements made to airlines’ travel systems since the inception of commercial air travel. The 1960’s was a decade plagued with some rather large issues, but it was also a time period with beautiful art and unique forms of expression. The TWA hotel seeks to accomplish a focus on the latter and will amaze anybody who steps in.