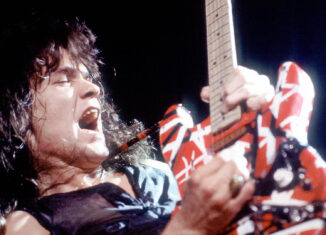 Edward Lodewijk Van Halen, founder and lead guitarist of the popular rock band Van Halen, was born in Nijmegen, Netherlands, on January 26, 1955. In the early 1960s, his family moved to Pasadena, California where he and his brother Alex learned piano and improvised classical music. As teens, Alex started playing drums while Eddie started playing guitar, and together, they created their first rock group called Mammoth. With the help of singer David Lee Roth and bassist Micheal Anthony, the band took off in 1974 with the name Van Halen. The band’s first album was self-titled and featured the hit single “Running With the Devil.” Music videos for “Jump” and “Panama” became increasingly popular along with their multi-platinum albums Van Halen II, Fair Warning, 1984, and more. In 1985, however, tensions rose between Roth and the other band members, leading to Roth leaving the band and creating his own solo album. However, even after this setback, the band still released successful albums throughout the ’80s.

By 1990, Eddie and his wife Valerie Bertinelli welcomed their son Wolfgang. A few years later, sadly, he and his wife divorced. However, he eventually found a new love with Janie Liszewski with whom he remained happily married until his death. Starting during his first marriage, Van Halen was diagnosed with cancer and had been fighting battles against various types, like tongue and throat, on and off for the past few decades.

Although his battle with cancer ultimately cost Eddie his life, his legacy will forever remain intact. Ranking at No. 8 in the Rolling Stone’s 100 Greatest Guitarists, Van Halen influenced generations of music to come, as well as music existing in his own time. Likewise, Joe Elliot of Def Leppard credited him with “[reinventing] guitar playing just like Jimi Hendrix had done a generation earlier.” The “genius” will never be forgotten and will live on in infamy in the world of rock music.