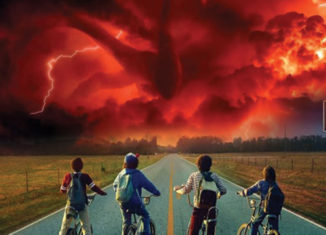 On August 31st, 2016, Netflix premiered a new show called Stranger Things. The first season finale of this wildly popular show left people with a million questions. Finally, season two is out and available for streaming. While many questions were answered with the first season, many cliffhangers left people wondering.

Season one left us with an image of Will, one of the four main characters, coughing up a specimen from the upside down world. In season two, we soon learn that the specimen is Dustin’s (another main character) new pet, Dart. The creature evolved into a larger and more dangerous form of what we were shown in season one. Dart causes many problems for the people who live in Hawkins, the fictional town in which Stranger Things is set.

The real question is, however, why is this Netflix show such a huge hit? The answer is rather simple: it has a unique, universal appeal. The show appeals to pretty much all ages. While it can be eerie at times, it is the comedy that the four main characters emit that makes the show enjoyable to watch. This series has never had a dull moment, and with the new relationships formed and the new characters introduced, viewers can’t take their eyes off of the screen.

To summarize season one, the entirety of it is based upon the disappearance of Will Byers. He is taken to the upside down, a parallel universe. Everyone spends all their time looking for him and discovering new things, like a little girl named Eleven who is around Will’s age. Eleven is later revealed as a scientific experiment by the Hawkin’s Lab. This little girl, Eleven, has powers and helps everyone find Will’s location. Another reason everyone needs to find Will is because the monster claimed another victim, Barb. Her best friend, Nancy, is the only one who knows where she is. In the show, viewers learn of Eleven’s harsh past, having been taken from her mother to be experimented on in the lab. After a while, the search for Will starts to die down, and hope is lost. Mike and Eleven begin to spark a flame as more than friends. Nancy and Jonathan, Will’s older brother, find an opening to the upside down world. This opening gives everyone an idea that Will is still alive. Will’s mother Joyce and officer Hopper, the town’s Sheriff, track down a woman that could possibly be Eleven’s mother because they are desperate for answers. While all of this is happening, Eleven is running from the “bad men” who are trying to capture her for more experiments in the lab. In the meantime, Will can only communicate to his friends and family through lights – very strange. Eleven tells the group that she thinks she can find Will and Barb using a sensory-deprivation tank. This causes the group to travel to the school gym where they used a bathtub, a lot of water, and tons of salt to improvise. They lure the monster to the school where Eleven uses her powers to stop it. Will is found and the monster is destroyed, but is it really gone forever? Viewers find out in season two.

At the end of Season one, Will’s loved ones are all relieved that he is with them and alright. Little do they all know, however, he is not totally fine. Will starts to experience some effects of being in the upside down for so long. Without any warning, Will has traumatic episodes. He is non-responsive and feels as if he is living a real life nightmare. He receives treatment from doctors, but they do not have many answers for him and his concerned mother. During Will’s episodes, he returns to the upside down where his life is threatened by a monster: the Demogorgon. During one of his episodes, the Demogorgon consumes his body, though Will does not realize the extent of this. The Demogorgon is now a part of him. The people of Hawkins decide that killing the Demogorgon will resolve all their problems, but if the Demogorgon is forever gone, so is Will. Dart, the once very small and innocent pet of Dustin, is now huge and deadly. They try to fight them off, but do not always succeed. One of the problems of Will being taken over by the Demogorgon is that it is always one step ahead of them.

While all of this is taking place, Eleven is being held in officer Hopper’s house where the “bad men” can’t get her. Although Eleven is definitely not happy here, it is for her own safety. After almost a year being stuck in this small house where she feels extremely claustrophobic, she leaves which is the only thing she was not allowed to do, according to officer Hopper. Her immediate thought was to see her sister, who she only vaguely remembers. She travels to find her sister, Eight, who has other types of powers. Her sister uses her powers for bad, unlike Eleven. Eleven has good morals, and after seeing her sister, she decides it would be best to go home and reunite with Mike and Will. When Mike and Eleven saw each other for the first time in a while, it was undeniable that sparks were flying.

Rumors are spreading about a third season, and fans couldn’t be more excited. Some fan favorite theories and questions for the possible upcoming season are very interesting. Will Joyce Byers and officer Hopper ever end up together? What is going on with Eleven’s mother, and what information does she really know? Will Eleven’s sister appear again? Is Will fully disconnected from the Demogorgon? Will we meet the other children with numbers, and if so, what will their powers be? Is Steve and Nancy’s relationship fully dead or is Nancy exclusive with Jonathan? Only time will tell, but we need to continue waiting patiently for the release of season three.