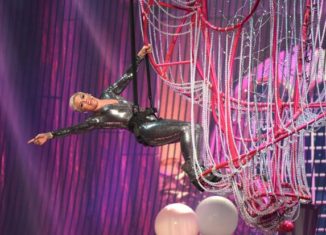 By: Austin Krach and Rachel Penzer

It’s an accomplishing feat to have the career longevity that P!nk has had. Coming onto the music scene at the turn of the 2000’s, P!nk has been churning out hits for 18 years now. While many of her fellow singers throughout the years have come and gone, P!nk has been a staple of the music industry and remained a superstar. With hits like “Raise Your Glass,” “So What,” and “Just Give Me A Reason,” she is bound to stay in pop prominence forever. P!nk released a lead single from entitled “What About Us?,” released on August 10, 2017. P!nk then released her seventh studio album entitled Beautiful Trauma on October 13, 2017. Some of the standout tracks from the album include the title track, “For Now,” “I Am Here,” and “Wild Hearts Can’t Be Broken.” Of course, we were both so excited to hear her new songs performed alongside all of P!nk’s past hits!

We were lucky enough to be able to attend the opening night of P!nk’s Beautiful Trauma World Tour at her first stop at Madison Square Garden in New York City. Openers DJ Kidcutup and Bleachers (who was a writer and producer on the album) got the crowd pumped for P!nk. Her set started in a way that only a P!nk show would begin, with P!nk swinging on a chandelier and singing “Get The Party Started.” P!nk also performed one of our all-time favorite songs, “Who Knew.” Despite having sung that song probably hundreds of times, P!nk forgot the whole second verse of the song proving that we are all just human! P!nk laughed it off and took it as a champ before transitioning into the chorus. During “Revenge,” a big blow up of Eminem came onto the stage during Eminem’s verse as P!nk proceed to kick him and get “revenge.” Also, some covers were performed during the night such as a “Smells Like Teen Spirit,” by Nirvana and “Just A Girl,” by No Doubt, with a mashup with her own single “Funhouse.”  Another highlight of the night was “Secrets.” During this song, P!nk did one of her classic high-flying, death-defying acrobatics act. It was truly an amazing spectacle to see and made me appreciate the song more. P!nk then surprised the arena by transitioning from the hit Just Give Me a Reason to a much more obscure song that only her diehard fans would be able to recognize at first listen. Up until this tour, P!nk had not performed the title track to her 2006 fourth studio album I’m Not Dead in over ten years, thus choosing to revive it could be said to be a tribute to the singer’s roots and fans that have been with her since the beginning.

To refamiliarize the entire audience, P!nk then proceeded to perform a series of her more recently released and recognizable songs that led up to the Beautiful Trauma Tour, beginning with single Just Like Fire released in 2016 for the film Alice Through the Looking Glass. Next up was the first single released from her Beautiful Trauma album, What About Us. To properly introduce this emotional and passionate number and show her inspiration for the lyrics, a video collage was shown in which the singer spoke about identifying people who struggle and the importance of everybody having their own voice, especially in today’s political climate. While singing the song, P!nk, accompanied by her backup dancers, added parts of the choreography that can be seen in the song’s powerful music video. P!nk and her bandmates then gathered around to play some more acoustic songs from her new album, the last of which was I Am Here, which on the album was recorded with a church choir and was imitated by P!nk’s backup singers in the live performance.

Getting ready to close the show, P!nk performed hit singles from her Greatest Hits album, Perfect and Raise Your Glass, anthems that everyone in the audience could sing along to. Afterward, her 2012 single Blow Me One Last Kiss was the last song; the audience expectedly demanded a double encore. P!nk selected two very different songs with two very different performances accompanying them for her encore. First up was So What, an extremely fun song known by most. The singer replicated its acrobatics from her last tour in which she flew and spun from a harness all around the arena, all while singing live, of course. Then, for her closing song, P!nk chose the much slower paced ballad Glitter in the Air. Many will recall that P!nk astonished her peers in the entertainment industry and at home viewers during the 2010 Grammy Awards when she performed this song. She choreographed it the same way she had previously when on tour in 2008 and 2009, held up in the air by only a pink silk and then spinning at a concerningly fast rate while soaking wet and, yes, still singing live. While that performance was incredible and gave everyone insight into the singer’s real skill set, P!nk chose to update it on this tour by performing it equally intimately, but in a different way. She came onto the stage in a completely different outfit from her showy So What leotard – simple baggy jeans and a ripped white T-shirt. The room lit up with cell phone flashlights as she sang the song to the best of her ability while just standing on stage and pouring her heart out to the audience.

In all, the Beautiful Trauma tour show was monumental for many reasons. New music was introduced in the most fun way possible, nods were given to older, more specific songs, and classic favorites, of which P!nk has a seemingly endless amount, were celebrated. P!nk has also proven time and time again that she can do it all, from singing upside down to connecting with an audience on a simpler level. P!nk and her tour crew really satisfied the entire audience. Whether you are a huge P!nk fan or just want to have a fun night of music, this show is truly fantastic!