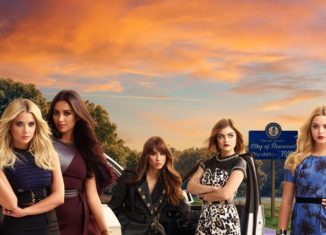 April 2017 marked the beginning of the end. Dramatic introduction, I know. But hey, it’s a perfect fit for the end of one of the most dramatic shows on television today! An immensely popular American mystery drama television series based on the 16-book long young adult novel series by author Sara Shepard is coming to an end after seven thrilling, gut wrenching, yet consistently successful seasons. The seventh and final season of Pretty Little Liars, which is now television network Freeform’s (previously ABC Family’s) longest running original series yet, will be graduating from the television line up along with the class of 2017. While the season premiered on June 21st of 2016, it was only confirmed in late August that this season would be the show’s last.

Beginning in 2009, the show follows the story of four high school aged girls, Spencer Hastings, Hanna Marin, Emily Fields, and Aria Montgomery, whose clique falls apart after the disappearance and previously thought murder of their group leader, Alison DiLaurentis. Both the television and book series begin as being set one year later, when the girls start receiving anonymous and threatening messages from a mysterious villain named “A,” who seems to want revenge for unknown things that happened before Alison’s disappearance. Now, seven years later, the television series has deviated quite a bit from the plot of the books, especially after the five-year time jump that took the show out of high school.

At this point I should probably warn you: spoilers are to come! Trust me- it’s a much better experience watching the drama unravel for yourself. For those PLL fans who are up to date on episodes, we left off in August with the tenth and final episode of the first half of the last season. Some major bombs were dropped that left fans itching for more (Ali falling pregnant with her possibly-alive and villainous husband, Noel and the still very much blind Jenna attempting to murder the girls, Noel accidentally facing death by beheading, Spencer getting shot, Toby and recent fiancee Yvonne being left possibly killed in a car accident while trying to leave town, and Spencer finding out that her biological mother is actually Ali’s questionably sane aunt, Mary Drake- you know, all the usual). Despite the numerous cliffhangers, fans were informed that the first episode of the final ten would not premiere until nearly nine months later, in late April.

As expected, this caused possibly the most buildup the show has ever experienced. That’s why when it was finally April, fans were ecstatic to find out what the girls’ final fate would be. The theme for this final season is one that the show has advertised for quite some time now: PLL Endgame. While many fans use this term to predict which of the show’s couples will survive or begin to prosper by the end of the series, the writers took it a step further. The beginning of the last ten episodes shows the girls receiving an interactive board game from the anonymous now-villain “A.D.” This “Endgame” is being used by A.D. to intimidate and threaten the Liars even further and eventually lead them to the final truth. While Spencer is the first to play the game by following its orders to visit Toby and Yvonne in return for an award in the form of a letter from Mary and a puzzle piece, Hanna decides to destroy the game, but is shot down when a video appears revealing that A.D. knows that the girls maybe killed Rollins, Ali’s now ex-husband. This leaves the girls forced to participate and be pulled in whichever direction A.D. desires.

Fans are promised by the writers, mainly via Twitter, that all will be revealed by the end of this season. This includes revealing the identity of A.D. and his or her purpose, which couples will or will not end up together, where the Liars will end up in the future, and hopefully much more. As this is the final season, one can only take their word for it. Regardless of how it ends, fans will be as devastated as the show’s staff; both the actors and producers are already working on new projects that can fans can look forward to. All we can do now is wait and see what the EndgAme has in store!