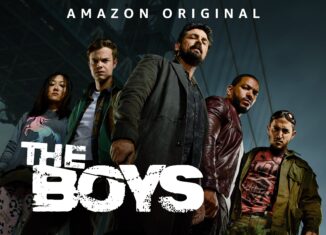 When Amazon’s The Boys came out in 2019, people were shocked to see how different it was from other titles in the “superhero” genre. The show is gritty, gruesome, and hilarious at all of the right times. That description may not give you the impression that this show offers extremely clever social commentary, but you’d be surprised to know it does. The Boys takes place in a version of the U.S. where superheroes are celebrities and public figures. The catch is, unlike the traditional presentation of heroes in media as do no wrong good guys, in this show they are sleazy, disgusting people behind the scenes of “Vought”,  a giant corporation that manages the heroes’ careers, lies about their allegations and plans their heroic acts for scripted photoshoots. Vaught’s goal is to make their heroes a part of the US military, so they can gain a piece of the Defense Department’s budget. “The Boys” themselves are all different characters who have a personal vengeance against superheroes, or as they’re called in the show; “supes”. Their goal is to take down Vought and expose their crimes.

The main “supe” in The Boys is Homelander. Homelander is a visual mix between Superman and Captain America, but more morally aligned with the likes of Adolph Hitler. He is a racist, power-hungry, nationalistic, and neoconservative superhero, who is painted as a patriotic warrior protecting the American people by Vought and has everyone fooled. When in front of the camera, he sports an American flag cape and spews propaganda about freedom and the American way, often using excerpts from the Bible; but behind the scenes, he is a violent, arrogant, and murderous psychopath with no regard for human life.

When The Hollywood Reporter asked showrunner and writer Erik Kripke about exploring dark themes and topics, such as white supremacy and racism, and the possible backlash over it by the public, he said, “I don’t have control over that. As a writer, you can drive yourself crazy trying to worry about what the reactions will be. The truth is we’re firmly within the superhero genre. We have action scenes. We have superheroes fighting. People are launching lasers and [stuff] at each other. The world is at stake. We have all of those things. We’re just deconstructing it as we go and playing the thought experiment of ‘what would they really be like in this world?’ So I think the show works for people who love superhero stuff and people who hate superhero stuff.”

I believe having this kind of realism sometimes in popular media is important, reflecting on our real and many times the unfortunate world can educate people on realities of life and help put a stop to hatred and issues in our society. As bad as it is, many public figures behind the scenes are similar to Homelander and other “supes”. They may not be murderers, but a majority of them aren’t representing themselves as they should be based on their actual beliefs. This goes for politicians, celebrities, and others in the public eye. Hopefully, this show brings this idea to people’s attention, so we can all be more aware.