You are here
Home > Entertainment > Sing Geared for a Younger Crowd 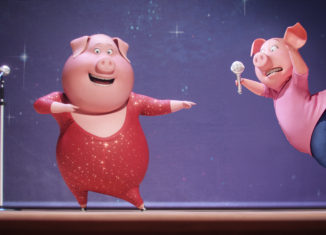 Sing, an animated fun-filled comedy with a lighthearted take on a modern music contest, is the perfect movie choice for a “family movie night.” Matthew McConaughey voiced the main character, Buster Moon, a hopeful koala bear who decides to run a singing competition to raise money in hopes of saving his theatre. Along with Matthew McConaughey, talented actors and actresses, such as Reese Witherspoon, Scarlett Johansson, Jennifer Hudson, and Nick Offerman, took part in the movie. The cast of animals consisted of cute pigs, a funny family of elephants, and an intimidating gang of bears. The plot brings exciting scenes and many laughs. Not only was Sing an enjoyable movie, but it brought messages of bravery, teamwork, and following your dreams. Many real life scenarios were portrayed throughout the movie which made this animated comedy very relatable. It showed the struggle of acceptance and seeking approval from parents, battling with “stage fright” and social anxieties, and pursuing your dreams despite social conformities.

While this movie was amusing, it may not appeal to all crowds. Its main focus was directed towards younger children, so in the eyes of two average teenagers, this movie was not a hit. Being that it takes place in an animal-filled city, it showed a strong resemblance to movies like Zootopia and Secret Life of Pets. The plot provided a cute and entertaining movie; however it lacked originality and a good focus. Like many other animated films of this time, the plot was very simple and structured. All in all, Sing was not able to bring a new concept to the table; it seemed very repetitive with a faintly familiar storyline. The story line focused on the main character trying to succeed and gain popularity back in his failed business, or the common adage of an underdog working to reclaim former glory.  Nevertheless, this movie did have a positive take on modern music and contained many popular songs, such as “Firework,” by Katy Perry, “Call Me Maybe,” by Carly Rae Jepsen, “Stay With Me,” by Sam Smith, “Chandelier,” by Sia, and many more hits from present and past artists.

This movie was filled with fun-loving characters, a simple storyline, and an overall playful feel. All in all, we feel that Sing is a better movie for six year olds and did not fill the expectations of sixteen year olds.