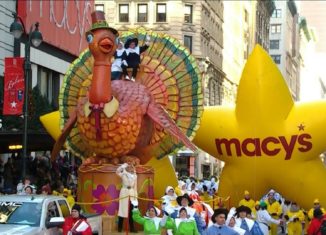 Thanksgiving is a national holiday that is celebrated throughout the United States. It includes an expression of gratitude, time spent with family, and obviously a lot of turkey. People all around the country celebrate this holiday by either hosting or going to large family gatherings. Another famous Thanksgiving tradition revered by all Americans is the annual Macy’s Thanksgiving Day parade in New York City.

This parade is considered one of the most spectacular events of the year. People from all over the country come to New York City to see the performers, balloons, cheerleaders, floats, clowns, and musicians. Each year, new floats, balloons, and musicians attend the parade. The 2016 Thanksgiving Day parade included special guests, like Tony Bennett, Sara McLaughlin, De La Soul, The Muppets, Aloe Blacc, Kelsea Ballerini, Hamilton’s Christopher Jackson, Laurie Hernandez, Claressa Shields, Michelle Carter, Regina Spektor, Chloe x Halle, Daya, Maddie and Tae, Brett Eldredge, Fitz and the Tantrums, and Jacob Whitesides. The artists performed on the elaborately decorated floats with marching bands, cheerleaders, and clowns nearby for additional entertainment in between musical performances. There are always new balloons, and this year was no different. This year parade-goers welcomed characters from the movie Trolls and Diary of a Wimpy Kid, with a warm welcome back to Charlie Brown after a four-year hiatus. A new and improved replica of the very first Macy’s Thanksgiving Day parade balloon from 1927, Felix the Cat, also made an appearance.

Adults from all fifty states of the country and a few international tourists will be hoisting their children high above their shoulders to see the magnificent sights. It may have been a chilly morning, but getting dragged out of bed on November 24th was worth every layer in which one had to bundle. From Central Park West to Columbus Circle and Sixth Avenue, crowds line the streets and patiently wait for the familiar marching band music to waft in their direction. According to nyctourist.com, an average of 3.5 million people enjoy this parade each year because of its performances, sights, and traditions. Every aspect of the Macy’s Thanksgiving Day parade is so special to so many; it’s no wonder that it continues to draw an international crowd of millions.