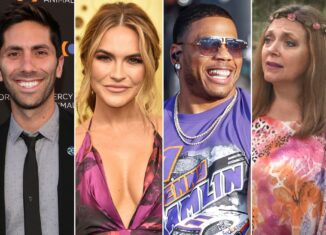 Season 29 of Dancing With the Stars returned to ABC on September 14 in the midst of the coronavirus pandemic. Due to the pandemic, many changes have been made to the show to maintain the safety of the judges, dancers, stars, and host. The judges now sit at a bigger table socially distanced, while the contestants watch from an elevated platform above. Since fans can no longer come to the show, there are inserted crowd noises. During the show, all dancers and stars have to live apart from their families. This includes pros who are married to each other on the show. Pro dancer Emma Slater said in an interview that living apart from her pro husband, Sasha Farber, “is going to be bliss – I mean it’s going to be terrible. It’s going to be so different because we can’t actually interact and even prep with each other, which is something completely different, but we’re doing everything we can to keep safe. There’s going to be a lot of FaceTiming.” Other protocols that the show has put into place include temperature checks, requiring masks, and regular testing of the cast and crew.

The most notable changes in the new season are the new host and judge. ABC replaced longtime hosts Tom Bergeron and Erin Andrews with former supermodel and businesswoman Tyra Banks. Production claimed that they made this change to help the show evolve and to take the show in a new direction after several seasons of sagging ratings. Pro dancer Derek Hough returned to the show as a judge after being a pro on the show for ten years. Derek will be replacing longtime head judge Len Goodman who is unable to return because of the coronavirus pandemic. He will join returning judges Carrie Ann Inaba and Bruno Tonioli in the ballroom for this amazing season in a time where everyone needs something uplifting to look forward to.