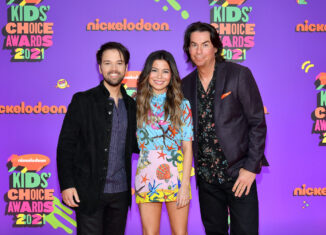 When the popular Nickelodeon show “iCarly” first hit the screen in 2007, kids immediately fell in love with the fun, quirky, and interesting storyline of Carly, Sam, and Freddie’s journey to internet fame on their web show. The series began with just Carly, her best friends Sam and Freddie, and her brother Spencer living in an eccentric Seattle apartment producing the web show iCarly, which would later become a big hit. As time went on, more characters, such as the beloved Gibby, T-BO, Lewbert, and Mrs. Benson, made more frequent appearances on the show. However, the show would later come to an end after just six fun-loving and memorable seasons with the series finale “iGoodbye” airing on November 23rd, 2012. Fans all around the world were devastated, and they had to come to terms with the fact that their favorite show was over for good. Thankfully, towards the end of 2020, iCarly fans were given hope as it was announced that the show would officially be returning to the big screen. Fans were overjoyed to hear this as iCarly is still one of the most memorable and popular television shows, with it being nominated for the Outstanding Children’s Program Emmy award five times. Since the announcement, fans have speculated what the reboot will be like, who the cast will be, and when it will be released. Although we do not know all of this information, Nickelodeon has released some clues to help keep the public’s excitement at bay.

Will the original cast star in the reboot?

Yes and no. Part of the original cast including Jerry Trainor (who played Spencer), Miranda Cosgrove (who played Carly), and Nathan Kress (who played Freddie) will all be returning to reprise their respective roles. Unfortunately, this does mean the fan favorite characters of Sam (played by Jennette McCurdy) and Gibby (played by Noah Munck) will not be returning. As sad as this is, it does not mean that the show will be any less interesting or successful than it was before. Thankfully, there are two new characters joining the beloved cast. This includes Harper (who will be played by Laci Mosley), Carly’s best friend and roommate. In addition to Harper, Millicent (who will be played by Jaidyn Triplett) will be joining the characters. Millicent is Freddie’s stepdaughter who is obsessed with social media and known for being snarky.

What will the reboot be about?

If you ask anyone who used to watch iCarly growing up, they would say iCarly was about three best friends on their journey through high school and internet fame, figuring out how to find themselves in this crazy world. They would also say that iCarly was most definitely a kids show. Because the young audience who watched iCarly growing up is now in their late teens or early twenties, the showrunners decided to let the show grow up with its audience. The iCarly reboot is said to be a show about Carly and her friends navigating work, love, and family throughout their twenties, and to be a more “grown-up” show. This excited fans as reboots often follow the same storyline as their original show, and continue with childish and overly kid-friendly scripts. However, according to the fans, iCarly has got it right!

When will the reboot premiere?

The iCarly team has yet to announce an official release date. However, fans have been loving teasers from the cast about when it could premiere!
The news of the iCarly reboot has brought forth hope and something to look forward to in a time where those things are rare. Although there is no release date yet, fans should still get their popcorn and TVs ready because the show could premiere soon!