You are here
Home > Entertainment > Who was Alex Trebek? 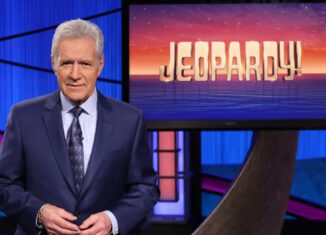 Just saying the word “Jeopardy” is a guarantee that the catchy tune everyone knows will begin playing in your head. Being America’s most popular game show, Jeopardy has made a significant mark in television history. Unlike the average gameshow, Jeopardy is different in that the answers are given, and the contestants have to supply the questions. A big part of the show’s success, however, is due to its host of 36 years, Alex Trebek. Alex’s face has been trademarked on the game show since its first airing in 1984. Known for his soothing voice and witty character, Alex Trebek became a part of many families’ weekly evenings. Unfortunately, after a tough battle with pancreatic cancer, Trebek passed away on November 8, 2020.

After making an announcement in March of 2019 about his diagnosis with stage 4 pancreatic cancer, Trebek remained hopeful. He planned on fighting the battle and did not let it interfere with his career. He began chemotherapy right after his diagnosis and continued hosting Jeopardy. There were days where working was hard, he said, but he didn’t want to let down his viewers, family, and God. The odds of surviving pancreatic cancer for a second year are less than 7%, and while Trebek wanted to reach this milestone, he passed away peacefully in his home surrounded by family, including his wife of 30 years and his two children, after battling for just 18 months. He was 80 years old.

George Alexander Trebek was born in Canada in 1940 and became an American citizen in 1998. Prior to Jeopardy, Trebek began his career in broadcasting, specifically for the Canadian Broadcasting Corporation. It wasn’t until he began hosting “The Wizard of Odds” that he gained exposure to U.S. audiences. Once he got the gig for Jeopardy, the rest was history. Trebek has won six Daytime Emmy awards for outstanding game show host. Despite all his fame, he never considered himself the star of the show. Trebek was so closely tied to the show that in 2018 when he took a brief medical leave for other issues, the show never aired episodes with a guest host; his commitment to the show was a two-way street!

Despite Trebek’s passing, the show must go on. Trebek would want the show to continue on as this is his legacy. However, replacing Alex’s famous role is not going to be easy; the bar is set so high. The show has decided that instead of naming a new host right away, they will have several guest hosts until they can determine a long term host, beginning with the greatest Jeopardy player of all time, Ken Jennings. The continuation of the show will bring the memory of Trebek into viewers’ homes every day and enable his legacy to be honored forever.