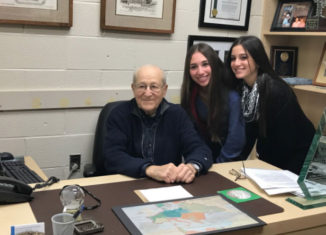 When a piece of the past is about to be gone, it is important to preserve it. And just like history that is written down, recorded, and videotaped for people to see and learn from in the future, a single person’s story of survival must not be lost upon their passing.

The Adopt a Survivor program is a way for Holocaust survivors’ stories and experiences to be passed down to the third generation. In order for this horrible time to be remembered, we must learn and share the stories from the few survivors left. Although Holocaust survivors are aging and dying, the Adopt a Survivor program enables their life journeys to live on. This program was created by Irving Roth and is held at Temple Judea.

Irving Roth is a Holocaust survivor who we adopted. We are learning his story and hope to share it with as many people as possible. Before we met him through this program, we were already familiar with Irving and his story, since he spoke at West Hollow Middle School. When we found out we were adopting Irving, we were even more excited about the opportunity because of how amazing and inspiring his speech was at the middle school. Now, we are meeting with Irving on a regular basis in order to get a full understanding of the Holocaust and how it impacted his life.

At our first meeting with Irving, we had the initial impression that he was a very sweet and soft-spoken person. However, once he began talking, we realized the true difficulties of his childhood. When he spoke about the hardships he faced, his tone of voice became more intense, and he paused many times to let us digest the information. Irving’s office is a small, unassuming space that contains many awards, tributes, and photographs, many of which we have come to learn about. During our first meeting, Irving presented an overview of Holocaust. He showed us a map and explained how geography and early 20th Century events affected the rise of Nazi Germany. After World War I, Germany experienced major suffering since they lost the war. Irving explained how Adolf Hitler turned this around on the Jews. Hitler brainwashed the people of Germany by saying that the Jewish people were the cause of inflation and many of the other problems in Germany. With the help of propaganda, Hitler was able to form a party founded on anti-semitism. Hitler formed a modernized army, disregarding the agreement Germany made subsequent to World War I, which stated that Germany could no longer have a military. As more and more people began joining the Nazi party, hatred towards the Jews began building.

From there, he spoke to us about his life before the Holocaust. Irving was born on September 2, 1929 and lived in Slovakia. When he was just ten years old, his entire life changed. Irving lived with his parents, grandparents, brother, and his Christian nanny, whom he loved. His father owned a successful railroad tie business. Some of Irving’s favorite activities were playing soccer at the park and swimming with his friends at the beach. During the summer of 1939, he began seeing changes, such as Jews no longer being able to enter the park and the beach. Although his family noticed these changes, they didn’t think much of it and did not flee the country. Irving was very close with his nanny; however, she was forced to leave his family when a law was passed stating that non-Jewish women could no longer work for a Jewish family. Irving also talked about how during a very cold winter, he had to give in his sheep skin coat to the government after a law was enacted stating that Jews could not own furs.  On Irving’s first day of school, he saw the “most beautiful girl that God created.” Irving built up a relationship with this girl, and it lasted until her father forbid her from spending time with Irving. He was Jewish, and she was not. The girl told Irving that her dad said that Jews are evil, and they cause all of the problems.

At out next meeting with Irving we are going to learn about how his life continued to change as a result of the Holocaust. The main reason the Adopt a Survivor program was created was to inform people of this tragic point in world history. Learning this information first-hand through a survivor is extremely special. We feel that it is important to pass down the information that Irving has shared with us to everyone in order to ensure that something as horrible as the Holocaust never repeats itself.

Irving Roth and His Deportation (Part 2)

September comes around and we take for granted our education, all rolling our eyes or moaning and groaning about going back to school. But in September of 1941, Irving Roth, along with other Jewish children, was stopped by his own principal when entering his school. Not only were Jewish students not allowed to attend school, but Jewish teachers, government workers, and business owners also lost their jobs. Irving’s father, Joseph, owned a railroad tie business which unfortunately, he was no longer allowed to run due to the newly enacted German Nazi laws. Joseph quickly turned to his non-Jewish friend Albert to take over the business for him. Joseph and Albert made a deal so that Albert would be staging the ownership, while Irving’s father would continue to hold the responsibility of running the operations of his business. Although this may have seemed like a reasonable plan, Albert took control of the business by ultimately forcing Joe out of it. This demonstrates a cruel side of human nature and how people you may have had complete trust in, could turn their back on you as a result of greed.

The lives of Jewish people were constantly changing in that they were no longer allowed to live on the main street, they had to sit in a separate section in movie theaters, they had to wear a yellow star sewn on their clothing, and they had to obey a curfew to be home before dark. All of these changes were evident prior to the summer of 1941, when the situation for Jews took a turn from being awful to horrific. Jews were being murdered by the German Nazis as part of their plan to get rid of all Jewish people. At first, the Nazis were rounding Jews up and killing them with guns. Within six months, hundreds of thousands of Jews were killed, however this method wasn’t quick enough for Hitler; he felt that the murdering was slow and sloppy, and it took too many people to complete the task. This was when the plan of action occurred and the Nazis developed concentration camps to kill the Jews in mass numbers. The Germans held a meeting in Berlin on January 20th, 1942 with some of the most educated doctors, engineers, chemists and other people, and in about 90 minutes, they came up with a method that allowed them to kill over 5 million Jews with gas chambers in death camps.

During the summer of 1942, the 2,000 Jewish people living in Irving’s city in Slovakia were rounded up in the middle of the night. They were given 10 minutes to pack food and clothing and were then marched to a synagogue. Here, 1,800 people were stuffed into a synagogue that was meant for 500 people. There was no water, no bathroom, and no air conditioning. After three painful days, they were finally taken to the cattle cars and transported to the border of the city where they were murdered. Luckily, Irving and his family were not in this group of 1,800 people. Irving’s family was one of the few that were allowed to stay in the city temporarily, since they needed people to help manage the city. However, Irving’s family knew they were in dire trouble, and once Irving’s grandparents got arrested, they all fled to Hungary. In Hungary, Jewish men were needed for a slave labor force, so their families were allowed to stay in Hungary with limited freedoms. Irving and his family bribed the bordermen so that they could get across the border from Poland to Hungary. However, around late April-early May of 1944, the police began rounding up Jews in Hungary. Although Irving tried to hide, he and his family ended up being deported to a ghetto in Germany. They were only there for a short time before being stuffed into cattle cars with stagnant air, no place to sit, no food, and fearing for their lives each time the train stopped. While they were in the cattle cars, the Germans demanded any money or jewelry that belonged to the Jews, and people were forced to go through their pockets, handing over watches, wedding bands, earrings, and any other valuables that they had left. The Germans tricked the Jews by telling them to put their names on their luggage so that it would be delivered to them, but it never was. As Irving approached the concentration camp, he saw chimneys with flames, and his cousin asked what Irving thought they were making in that factory. He replied, “Soap, they are going to make soap out of us. But Zoli, I will refuse to bubble.”

Once they arrived in Birkenau, they were directed to a selection platform where Irving tried to stay close to his relatives, while mothers, children, and babies were crying, guards were screaming, and dogs were barking. There, people were examined and split up based on their health. The 90% of the people that were old and not healthy were murdered, while the other 10% who were healthy and young were given striped uniforms and had their heads shaved. The unhealthy group was told to remember their clothing hook, to tie their shoes together; they were given a bar of soap, under the impression that they were going to take a shower. However, moments after entering the shower, crushed marble turned into poisonous gas suffocating and instantly killing the Jews. After this, a few Jews were ordered to go into the gas chamber to look for anything of value. The bodies of those who were murdered were then piled into an elevator which took them to the ovens to be burned into ash. The treatment of Jews in Irving’s camp was brutal and the living conditions in the barracks were no better. Jewish people were forced to sleep on hard shelves and were fed an unknown, bitter, dark black liquid for breakfast. On the third morning in the Birkenau camp, during “Appell,” or roll call, a hypodermic needle was used to tattoo numbers onto the prisoners’ skin. Irving sat down and the number A10491 was pricked and burned into his skin. Although he was branded like a horse, eventually, Irving and the other healthy Jews were marched two miles away from the death camps, where they would work in slave-labor camps.

In our next meeting with Irving, we will be learning how Irving spent his days at the slave-labor camp. He will be explaining how the long days of treacherous work proved to be hard for him at his young age and how living each day in fear impacted his life.