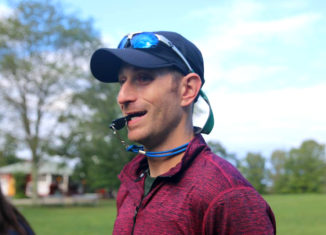 “Scott Beigel wasn’t a hero because he opened the door to his classroom at Marjory Stoneman Douglas High School that day. He was a hero because he opened doors every day” (ESPN Magazine). Scott J. Beigel was one of many victims of the Marjory Stoneman Douglas High School massacre in Parkland, Florida on February 14, 2018, and a beloved High School East alumni. Scott was not an ordinary man. He was a teacher, a camp counselor, a cross country coach, a friend and family member, and certainly a hero. On the horrible day of the shooting at the high school where  he taught and coached, Scott was shot and killed when he unlocked the door to his classroom so as to offer his students a safe haven from the shooter. Scott sacrificed his life in order to save and protect the lives of others, which is why his heroic actions are so commemorated even two years later, and he will forever be remembered as a hero.

For 28 years, Scott spent his summers at his home away from home, Camp Starlight. Starting at age 7, he returned each following summer and became a beloved camp counselor and staff member. The summer of 2018 would have been Scott’s 29th summer returning to camp, one of the places he loved the most. However, his time was sadly cut short, and he never made it to that 29th summer. Camp Starlight has a memorial for Scott Beigel to remember his life and all he has done. In 2017, Scott accepted the position of ninth-grade geography teacher and cross country coach at Marjory Stoneman Douglas High School. Teaching, guiding, and mentoring students became his life mission.

On Sunday, October 20th, 2019, the Scott J. Beigel Memorial Fund held a 5k run/walk at the Heckscher State Park. The fund’s mission and purpose is to help send underprivileged children touched by gun violence to summer camp. In the park, there were t-shirts to commemorate the event and an awards ceremony, including a BBQ, face painting, balloon animals, caricature artist, and a birthday cake. Mr. Met even made an appearance to add to the family fun atmosphere. While this was its first year, the Run 4 Beigel walk/run is intended to become an annual event. Scott’s family and friends, in addition to members of the Half  Hollow Hills Community, were in attendance that day to commemorate the life and memory of a true hero. Scott’s sister, Melissa Zech, said about her brother that “he was a hero before he saved these lives. Just as many people who will be talking about Scott would be calling him a hero even if this didn’t occur.”