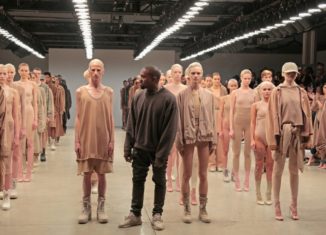 It’s that time of year again. Fashion designers, models, and critics arrived in New York City to show off their new spring and summer collections for 2017. This year’s lineup included both fan favorites and newcomers to the NYFW runway. Not only were all of the clothing designs impeccable, but the hair, makeup, and set designs also captivated the attention of the audiences.

Marc Jacobs is always a crowd pleaser at NYFW, but this year he outdid himself. Jacobs did a fantastic job in creating scenery that was unique and original with lights dangling from the ceiling at a multitude of different heights. His show consisted of all new designs that have never been seen in the fashion world. For this particular collection, Jacobs collaborated with Julie Verhoeven, and together, they established an unforgettable lineup that consisted of platforms and models’ hair up in yarn-like dreadlocks. It also helped that Jacobs was provided with amazing models, including Gigi Hadid, Bella Hadid, Adriana Lima, Karlie Kloss, and Kendall Jenner to walk in his show.

Alexander Wang also stepped up to the plate when it came to his new collection. Inspired by activewear, Wang decided to incorporate men’s fabrics and form female clothing with it. Many of the looks consisted of strappy tops with more flowy or baggy bottoms. His clothing truly made a statement. Wang also surprised his audience with an additional collection as an encore. This collection was a direct reflection of his collaboration with Adidas. Wang created all new looks inspired by the original Adidas style. After his show, a wall opened up revealing a huge party space behind his runway which consisted of food trucks, graffiti, and a DJ. This addition definitely added a bit of fun to the show.

In her show, Rebecca Minkoff stepped outside of the box… literally. Minkoff’s whole show took place outside on Greene Street between Prince and Spring streets, where her retail shop is located. Minkoff’s reason for this location is that she wanted people to see where the clothes would really be worn. She didn’t feel that it was right to just send them down an indoor runway. As her models walked down the New York City streets in the cool clothes that were part of Minkoff’s collection, Beau, a folk rock duo, performed live. On the back of Minkoff’s finale piece, street artist Ann Lewis painted an inspirational saying: “We all bleed the same color.” Minkoff also participates in the “see now, buy now” trend that is becoming popular in the world of NYFW. After the show was over, people were welcomed into Minkoff’s retail store to purchase any of the pieces that they admired from the show.

Finally, Kanye West’s Yeezy show made a huge statement in the world of fashion. In one of his shows, Kanye had his models walk a triangular shaped runway that surrounded a field of additional models who wore spandex bodysuits of their skin tone. While this runway show was very interesting, and the clothes were very controversial, there were some models that had shoe malfunctions in the middle of the show. Multiple models had their heels break, causing them to take off their shoes halfway around the runway. Aside from the shoe problems, the show was a huge success.

This year’s New York Fashion Week was filled with brilliant, new, and innovative designs that will have people talking for a long time. The impressive clothes, set designs, hair, and makeup all came together to form shows that changed the way people look at fashion. New York Fashion Week 2016 is definitely one to remember.