You are here
Home > Lifestyles > Black is the New Brown 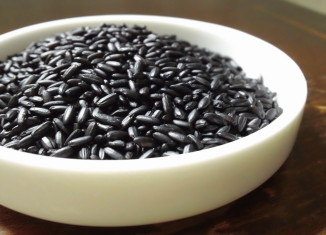 When it comes to rice, it is worthwhile to consider the benefits of the often-overlooked option, black rice.  In ancient times, black rice was earmarked for the Chinese emperor, and the common people were banned from eating it.  That anecdote explains its popular nickname of “forbidden rice.” For a time, the black variety of rice was given to the elderly in Asia because it was believed to have medicinal effects. Black rice has acquired a mysterious and exotic reputation due to its history and dramatic ebony coloring.

When comparing black rice to the other healthy alternative, whole grain brown rice, the two are similar in the way they are cooked and how they taste.  Some people will argue that black rice is a little nuttier and chewier. Regardless of taste, it is definitely a better choice than the more traditional white rice when it comes to health value. White rice is processed by removing the bran and germ layers, thereby destroying the antioxidants. Brown rice keeps these healthy layers, but only black rice has the antioxidant anthocyanin, also found in blueberries.

In contrast to white, brown, and red rice, black rice has higher amounts of antioxidants, fiber, and protein. Food science researchers have established a correlation between anthocyanin and its therapeutic benefit in preventing cardiovascular disease and some types of cancer.  It restricts the unhealthy accumulation of plaque in the arteries, which is a leading cause of heart attack and stroke. Anthocyanin has also been linked to reducing a person’s “bad” cholesterol that can lead to cardiovascular disease. Furthermore, black rice contains Vitamin E, which improves a person’s immunity, eye health, and skin health.  According to a NIH (National Institute of Health) study in which rabbits were fed black rice, their blood levels indicated more antioxidants in the blood, less toxicity in the liver, and less arterial plaque. It appears that black rice can attack a wide range of conditions by reducing one’s overall level of inflammation and cleansing one’s body of toxins.  On the horizon, studies are underway to evaluate black rice for its potential use as a natural food coloring, as well as its health benefits in the prevention of Alzheimer’s and diabetes.

One of the leaders in researching black rice, Dr. Zhimin Xu, assistant professor at LSU, indicates that black rice is not being grown on a commercial scale in the United States, but hopes that his research will provide the impetus for Southeast farmers to begin to grow it. He contends that, “black rice would be a unique and inexpensive way to increase people’s intake of antioxidants, which promote health.  If berries are used to boost health, why not black rice?” (WebMD)

As a delicious side dish all by itself, black rice can also be adapted to savory options including soups, stews, salads, or even stir-fry.  In Asia, black rice is most often consumed in the form of noodles, sushi, and desserts. It seems as though one’s imagination is the limiting factor to black rice’s culinary transformation.

As a feast for the eyes, as well as the taste buds, the following recipe combines textures and flavors in a cold salad using black rice.

½ Cup toasted walnuts (toast in the oven and cool)

Black rice was introduced in the United States in the 1990’s.  Although it has not yet gained a tremendous following, black rice can be found today in Asian markets, health food stores, and some gourmet markets. As more people realize its health benefits, the popularity of black rice will hopefully continue to grow and become more widely available.