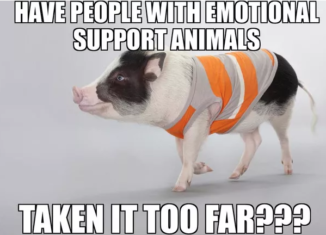 Emotional support animals have been showing up in more and more places lately, and many people are starting to question whether some Americans are abusing the system. Although the vast majority of emotional support animals are dogs, many Americans are saying they need a variety of animals, including ducks, peacocks, pigs, reptiles and many more species, for their mental health. It is becoming unclear where to draw the line between a legitimate emotional support animal and just a pet. The explosion of support animals has led to skepticism of true service dogs, and the number of people claiming they have a right to take these animals to public places is growing rapidly. Critics proclaim that pet owners are obtaining false certifications or letters from online therapists to get permission to bring their animals into places where they normally aren’t allowed or to avoid paying fees. More than 25 state legislatures have made new laws in an attempt to crack down on this type of fraud. More specifically, a law passed in Oklahoma gives restaurants and businesses the right to keep support animals out. A law passed in Utah makes it a transgression to lie about a pet being an emotional support animal, therefore expanding on the law that made it illegal to pretend a dog is a Seeing Eye dog. Florida state lawmaker, Sam Killebrew, sponsored a bill to allow landlords to require that any resident who claims a need for a support animal has to obtain a letter from a licensed medical professional. The Americans with Disabilities Act defines service animals like dogs or small horses that are highly trained to perform specialized tasks, like detecting seizures or safely leading a blind person. These animals are allowed in public places. On the other hand, emotional support animals provide comfort with their presence but generally have no special training. Thus, these animals do not have the same status under the disabilities act. But when it comes to keeping an animal in a rental housing unit, federal law has been elucidated to give residents the right to live with an animal that helps with anxiety or depression. Over the past few years, America has seen a huge growing trend in the use of animals for emotional support. Many laws have been passed, and people have seriously questioned the extent of the need for emotional support dogs and whether they are really being used for a serious purpose.