You are here
Home > Entertainment > The Inside Scoop on Unpolished 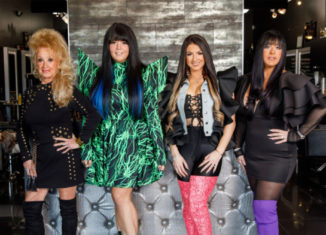 By: Hayden Fishbein and Sloane Levine

For the past two decades, reality television has taken the world by storm. Now, a brand new reality show is being taped right here in our own backyard. Salon Martone, located on Jericho Turnpike, is known locally for their extravagant nail designs, their experience in hair styling, their ability to create perfect tans, and their fantastic makeup application, but they are about to become more of a national news story. This already popular and trendy salon is getting ample press as they are being filmed for a new reality show called Unpolished. The first season of Unpolished premiered on TLC in November, and it is already becoming a fan favorite.

We had the opportunity to visit Salon Martone and interview two of the women who work there. While interviewing Lexi and Bria, we got to know them, and we learned so much about the salon. First, we were very excited to learn that Lexi and Bria both graduated from High School West; it’s always great to connect with HHH alumni. Bria shared that she got into this line of work by having a passion for dance when she was young and always being surrounded by hair and makeup. She now exhibits her talent at Salon Martone through styling hair. Lexi, on the other hand, was always into fashion. She studied fashion design at FIT, but when she saw the potential for nail art and nail designs, she fell in love. Lexi was always an artist and loves to paint small things making nails the perfect canvas to showcase her talent. She loves the details of hand painting and enjoys painting characters. Both girls grew up surrounded by women who work in salons and were encouraged to go into the same line of work. The matriarch of the family, for example, has been in this business for about 50 years, and the girls were initially inspired by her. Lexi and Bria used to work out of a house before they found a small location at a strip mall. Eventually, they needed more space and decided to move to a full size store.

So, how did this local salon become a reality TV show? Lexi, the talented nail artist, was on a show on the Food Network and met the Cake Boss, Buddy Valastro. They got to talking, and before she knew it, Unpolished was becoming a reality. It’s no wonder that the famous Cake Boss was impressed. Yes, those who work at the salon are very talented. Yes, they have so much to offer in the way of the typical beauty salon. However, Salon Martone is far from your average salon; it is a family run business with unique stylings and a trendy atmosphere. They wanted to bring the hip style and flair from Manhattan to Long Island, so they did just that. Bria and Lexi’s expectations for the salon is to continue growing and to hopefully get even more business from their reality show. Lexi’s phone is already going crazy from all the positive press they’re getting. This salon is entertaining, beautifully decorated, and fun. So, check out Unpolished on TLC, and stop by Salon Martone for a truly unique beauty experience. Appointments are definitely recommended!