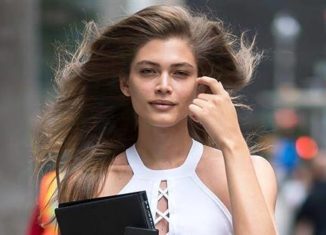 By: Olivia Borruso and Rayanna Shwom

Recently, Victoria’s Secret hired Valentina Sampaio to be their first openly transgender model. Sampaio, a 22 year-old Brazilian model and actress, was first identified as transgender at the age of eight by her psychologist, but did not adopt the name Valentina until four years later. Despite her delay in adopting a female name, she said that she always knew she was female. As a child, her parents and classmates both accepted and encouraged her to be comfortable and honest in her own skin. As an adult, she faced her first hardship when she was fired from her first modeling job, an ad for a clothing company, because she was transgender. Rebounding from this challenge, she walked her first runway at São Paulo Fashion Week in November of 2016. Her other major achievements included being cast in an ad campaign for a collaboration between L’Oréal Paris and Balmain in 2017 and appearing on the cover of Vogue Paris for the March 2017 issue as the first transgender model to appear on the cover of Vogue.

Victoria’s Secret decided to hire this model despite advisement against it by their marketing boss. The marketing boss, Ed Razek, quit his job soon after Sampiano’s employment. However, the loss of this marketing boss was essentially a gain. It marked the beginning of a new standard in which there is a more diverse selection of models, and now, members of the transgender community have a role model to look up to. This move towards gender diversity is a huge milestone for Victoria’s Secret, with the next step being hiring more models with diverse body types.

This hire also represents an significant step for the transgender community. Valentina Sampaio can act as an example of acceptance for all transgenders and give transgender women a role model to look up to. This shows transgender women that despite any rejection they may face, there will always be people out there who will accept them for who they are. Hopefully, seeing a transgender woman on the Victoria’s Secret stage will encourage closeted transgenders to be open and proud of who they are. As Valentina said in a recent Instagram caption regarding her most recent accomplishment, “Never stop dreaming.”