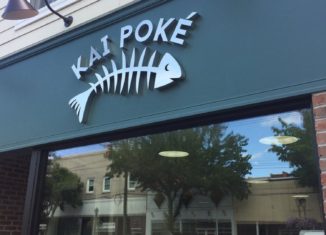 Brothers Jacob and Coleman Meier first opened Kai Poké on Main Street in Huntington in late July. They were greeted with hundreds of people ready to get their hands on the latest dish. A Poké bowl consists of cubed, marinated raw fish, rice, and 35 toppings. A regular bowl is $11 and a large is $14. The bowls come with a base of brown or white rice, quinoa or mixed greens, and a choice of ahi tuna, salmon, shrimp, or tofu. Some options for toppings include: mango, avocado, seaweed salad, crushed wonton noodles, and macadamia nuts. Each bowl is then finished with a sauce of the customer’s choice. When asked why they chose Huntington, the Meiers responded that they “love the community and thought it would be the perfect location for one of Long Island’s first poké bars.”

The Meiers were first inspired to open the poké bar after their trip to San Diego 5 years ago. They fell in love with poké and the hawaiian shop they bought it from. When they returned home, they began making the dish for their family members. They were so fascinated with the taste, that they offered the Meier brothers money to make extra. As a result, they decided it would be a bright idea to open Kai Poké.

On their search for high-quality fish, the Meiers met with many different seafood distributors. They settled on ahi tuna from South Korea and salmon farmed in Norwegian rivers. In order to ship the fish, it needs to be frozen to -76 fahrenheit after being harvested. In other words, the fish has to be “super frozen” before it is shipped. According to Newsday, “The Meiers defrost, debone and cube up to 120 pounds fish per day, then marinate much of it in a Hawaiian-influenced blend of soy sauce, pineapple juice, toasted sesame-seed oil, and fresh ginger and garlic.” A lot of hardwork and dedication is put into making these bowls. There is no question that the Meier brothers excel at it. Kai Poké is open from 11:30 a.m. to 9 p.m. Monday through Saturday, and 12pm to 8pm on Sunday. I highly recommend going to try this newest food creation that brings a little bit of Southern California flair right here to Huntington.