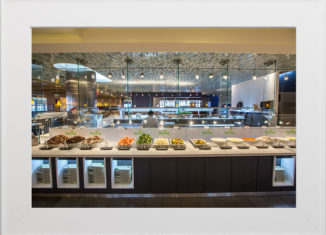 Though far, a well-valued tradition of my family is to go to Shabu-Shabu in Flushing, Queens. Sadly, the place we idolized and valued as a family tradition closed! After a long car ride to Flushing, my family and I, excited to encapsulate our senses in our favorite meal, were mortified when we walked up to the restaurant to see a closed sign. So, we asked around and found out that there is another hot pot emporium just a few blocks away. We would soon learn that this new spot is even better than the last. When we walked into the restaurant, I received a subtle wisp of Japanese artistry and an ambrosial fragrance. But, WOW… people EVERYWHERE!! Surprisingly, we did not have to wait a long time before being seated.

The wooden table had several metal pots protruding out of the surface with panels that controlled the heat source. I was given five choices of broth flavors, and I chose a vegetable. I then walked up to a section of the room that was presented as a buffet of seasoning and sauces to add to the broth. I chose fresh cilantro, sharp garlic, tangy scallions, umami-like soy sauce, piquant rice vinegar, and a few other random, but courageous accessories that I had never heard of. I walked back to my table to find the broth being poured into my pot and the dial being turned to initiate the heat. I plopped the mysterious concoction I just formulated into my broth. As the soup boiled, each particle that made up the soup arose into the olfactory receptors of my nose from the pot as steam, each having their own luxurious personality.

It was time to pick the ailments that would make up my magical elixir of excitement and adventure. There were tubs and tubs with new eclectic flavors of dumplings, noodles, and pasta. I also cannot forget the unique vegetables of every type flooding the room. I chose just about everything I could hold, and more, on the rectangular platter I received. I gathered pumpkin pasta, green tea pasta, vermicelli rice noodles, plain noodles, ramen noodles, tofu, fried tofu, mushrooms of every variation, taro root, lotus root, bok choy, butternut squash, cabbage, corn, an egg, soybean sprouts, yam, fish balls, and, surprisingly, a lot more! I went back to my table to find that my father had ordered several plates of chicken, veal, pork, and beef to share. The steam was blowing all over my face so powerfully that I unknowingly was receiving a facial. I removed some of the delectable broth that I conglomerated, put it into a miniature bowl, and expelled all of the comestibles from my plate into the pot. I also added some of the thinly rolled meat into the mix to cook along with the other things while I sipped what just may be the most delightful soup broth I had ever tried.

After a few minutes of pondering my tastes buds having ever had such a beautiful mixture of foods, I removed some of the elements from my chemistry experiment. I picked up the corn, only for my sensitive fingertips to be scolded by the intense temperature. I took a ladle of noodles and vegetables, blew on it, and stuffed it into my mouth. My taste buds were in a trance; fictitious sparks were flying, and my heart was in awe. So delicious, so sophisticated, a masterpiece, yet could be mistaken for a juvenile toy of a child’s play. My stomach quickly became full, but I did not stop eating; I ate until I could barely move a limb. At that moment, something caught my eye. I spotted a woman sitting at the table across from me with soft serve, a swirl of green and white. My mistakenly finished meal was, therefore, not finished. I stood up as if it was my life’s mission to find that smooth, thickened sweet cream. There was a small machine on the side with three levers, one vanilla, one green tea, and one swirl. I plucked a cup from the stack, pushed down the swirl lever, and whirled the cup around to make the perfect soft serve twist. I tasted it, and it was just as luscious as it looked. A simple but beautiful masterpiece. Thank you, Spring Shabu-Shabu!

I admire the splendiferous hot pot works of Spring Shabu-Shabu just as a botanist would be bewildered by a velutinous plant. And I have some fantastic news for you! If you do not want to travel far, a Spring Shabu-Shabu is opening in Carle Place soon!