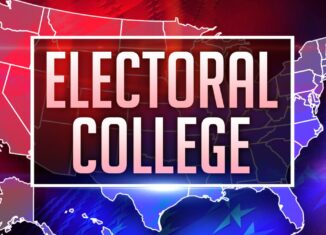 On November 3rd, the long-awaited Presidential Election was held. Although there had already been an abundance of early voting and mail-in voting, many Americans flocked to the polls on this day to cast their ballot for either Biden or Trump. At the close of the polls, the vote-counting began, which, as expected, lasted for many days. Soon after the election, however, states began to be called for each candidate by three major sources: CNN, The Associated Press, and Fox News.

Many of the historically Democratic, or blue, states remained that way, and it was no surprise that Biden won the huge blue states of California (55), New York (29), and Illinois (29). In addition, he was able to maintain his hold on many smaller historically blue states, including many of those in the Northeast and on the West Coast.

Conversely, Trump was able to keep the historically red states located mainly in the Midwest. These states tend to be small and hold few electoral votes, but when totaled it is a large sum of votes for Trump. There was talk of Texas, which has historically been a red state, turning blue for this cycle, and for a little while, it looked as though this was a possibility. However, it quickly became clear that this would not happen, and Texas’s 38 electoral votes went to Trump.

When it came to the major swing states, many predicted that Biden would be able to secure a so-called “Blue Wave,” in which he swept the swing states and had a landslide victory. However, the states fell relatively evenly. Biden won New Hampshire by around 7%, which is a large amount for a swing state. On the other side, Trump was able to take Iowa by around 8%. In addition, although it seemed as though it would be a major battleground state, Florida fell to Trump pretty quickly largely due to the Hispanic population that lives there.

The suspense in the election rose as the Great Lakes states of Ohio, Michigan, and Wisconsin were unclear of a winner. Ohio was first to be called, and Trump took it by around 8%, which was much higher than many thought. Both Michigan and Wisconsin were leaning red when many went to sleep on November 3rd, but by morning, both states flipped to blue, and Biden was later confirmed the winner in those states.

The following day saw a battle between a few key states: Georgia, Pennsylvania, Arizona, Nevada, and North Carolina. Arizona was called for Biden by some sources, but not all, so many were unsure if this was accurate. While many looked to Nevada to be the final push to 270 votes, in the end, Pennsylvania’s 20 electoral votes went to Biden and officially gave him the title of President-Elect. He ended up winning Nevada and Arizona as well, putting him above where he needed to be to win.

Joe Biden also won the popular vote with a record-breaking 81 million votes. Contrastly, Donald Trump had the second-highest number of votes ever in a Presidential election. The number of voters in this election stressed how important this election was to the American people. In addition, history was made by Kamala Harris, who became the first woman, the first black, and the first Asian American Vice President-Elect. In all, it has certainly been a historic year for the United States and the entire world.