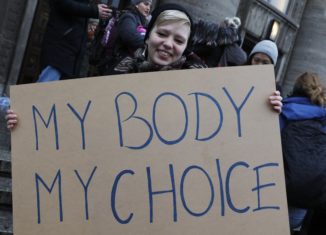 Recently, yet another state passed a law limiting abortions. Missouri joined Ohio, Georgia, Kentucky, and Mississippi in passing a bill known as the heartbeat bill. This law bans abortions after about six weeks, or when doctors can typically detect a heartbeat. Essentially, a six week ban is a complete ban since most women aren’t even aware that they are pregnant until after that point. The most extreme case of abortion restriction, however, is in Alabama, where Republican legislators have recently voted to ban all abortions, no matter what the circumstance may be. Additionally, they are pushing to make abortion punishable by up to 99 years in prison. This means that if a woman was raped and got an abortion, she may potentially be facing more time in jail than her rapist. Clearly, people are absolutely disgusted by this possibility and are fearful of what is to come. Not all of these bans are currently in effect; however, women across the country are angry and concerned that their constitutional rights are being stripped away.

In 1973, the Supreme Court made a revolutionary decision for women in the landmark case Roe v. Wade. The court ruled that a state law banning abortions was unconstitutional. Nearly 50 years later and this long standing precedent is facing threats from a few southern states and Republican legislators. Some anti-abortion advocates wish to bring a case to the Supreme Court that could lead to overturning Roe. The Pro Life contingency strongly believe that abortion is murder, and the most extreme proponents believe that it is murder no matter how far along the woman is in her pregnancy. Throughout American history, women have fought tirelessly for their equality, and many feel these new laws are a major setback in that fight. As a result of these new laws, people across the country are coming together in a powerful movement to fight the restrictions.

Nationwide protests are in progress in efforts to block these bans and to ensure women the right to control their own bodies. For instance, hundreds of people in Asheville, North Carolina protested downtown in response to the laws. According to polls, a majority of Americans are in favor of abortion and wish to keep the current legislation regarding the procedure. Despite this, anti- abortion laws are still rapidly being passed. Under no circumstance should anyone gain the right to control what a woman chooses to do regarding her own body, and this needs to be stopped.