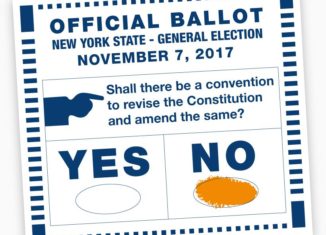 Although no president is being sworn into office this upcoming year, Election Day still carried a heavy weight as other votes were brought to the attention of the people. On Election Day 2017, this was no different. Every twenty years, New Yorkers have the chance to exercise their right to vote on the New York Constitutional Convention (or con con) on Election Day. This year’s ballot had the question: “Shall there be a convention to revise the constitution and amend the same?” Over the past few months, we have all seen advertisements, such as car magnets, expressing their views on this debate. I know what you are probably thinking: the Constitutional Convention was in 1787, so why are revisiting this in 2017? Well, this is a different type of convention. The New York Constitutional Convention meets every twenty years if passed, and if it is passed, 204 delegates are elected to meet in April and propose various amendments to alter the way the New York State government is run. Before they bring the proposed amendments to the people, they would have two meetings with the bicameral legislature, and if it is approved, it would be brought to the New York Citizens to vote on the amendments on Election Day the following year. If it is not approved, it would be placed on the ballot on the Election Day closest to its approval. Three delegates are chosen from each of the 63 New York State districts, plus an additional fifteen are back. Most of the delegates would be politicians, elected officials, or even high ranking lawyers. The Constitution was last revised in 1938, and they passed an amendment to bring it up again every twenty years. There are many reasons to approve and disapprove the convention.

Here is everything you need to know.

Opponents of the convention believe it will be a multi million dollar disaster.  If it passed, it would be extremely costly to run. All of the 204 delegates would have to be paid. Most are already Assembly members, so they would have to get double pay. All of their salaries would have to be paid for by NY citizens through their taxes. As my social studies teacher, Mrs. Toneatti said, “Voting no is proof of democracy in action.” Agreeing with her, another opponent, Caroline Marcus, explained that, “if we want to make additions to the constitution, we can add on amendments without having a constitutional convention.” Amendments can be made to the constitution through the amendment process.  The convention will also bring up issues, and may remove some of the rights that citizens have, such as the right to unionize, the right to compensation, and even the right to a free public education. The convention may also reopen discussions on how much citizens are taxed, as well as the way in which park systems and public beaches are run. The main thing that can be reopened for discussion is the removal or reduction of pensions for public employees, such as teachers, fireman, sanitation workers, and police officers. It was recently altered in Rhode Island, and opponents fear that the same will happen in New York. I reached out to Carlene Gould, a retired NYS teacher, and asked her what her opinion was on the convention. She explained that she was “greatly concerned about the possibility of losing my pension which I worked for over many years. I depend on this pension as well as my Social Security which together enable me to meet my expenses of daily living.”

Overall, the opponents launched a huge campaign trying to convince voters to vote no. This advertising worked because the proposal of the convention was defeated. On Election Day, an overwhelming 83.25% of voters (2,775,125 citizens) voted no. Citizens will have another opportunity to vote for or against this proposition in 2037.