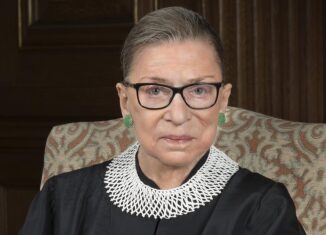 Justice Ruth Bader Ginsberg’s dying wish was to not be replaced on the Supreme Court until after a new president is installed. A great controversy has erupted over whether or not this wish will be granted.

Supreme Court Justices serve on the court for life, and when they pass away, the current president is supposed to fill their seat. However, since Ruth Bader Ginsberg (RBG) died only 46 days before the election, it is unclear whether Donald Trump will fill her seat or if they will wait to see the election’s results before the seat is put up. Ironically, a similar event happened just before the 2016 election. About 269 days before the election four years ago, Justice Antonin Scalia died. At the time, Mitch McConnell forced the court to hold off until the upcoming election so that the people could have some sort of say in who was appointed next.

However, since McConnell is a conservative, he is now taking an opposite stance on the issue and is pushing for the appointment of a new supreme court justice while Trump is still in office. This threatens to allow for a 6-3 conservative to liberal ratio on the supreme court. In order to do this, Trump would have to nominate and the senate would have to confirm a new justice before January 20, unless he wins reelection. He has already tried to start this process, recently declaring Amy Coney Barrett as his nomination. If another Republican nominee is installed, certain decisions such as Roe V. Wade have the potential to be overturned. Democrats are trying their hardest to delay this nomination until after the election with hopes of Biden winning; however, it is the job of the United States Senate to confirm a justice. Since the Senate is currently held by a Republican majority, they are likely to support Trump’s nominee.

If this is done, there is speculation that if Joe Biden wins office, he will attempt a form of Court Packing. This would propose adding two justices to the court, as this court has not been expanded in decades, which is inconsistent with population expansion. This has been done in the past, specifically in 1869 by Ulysses S. Grant in order to expand the court from 7 justices to 9 justices. It is possible that this will be attempted again in the following year if Trump fills RBG’s seat.

It is unclear what will happen, but it is certain that neither party wants to surrender a Supreme Court majority to the other.