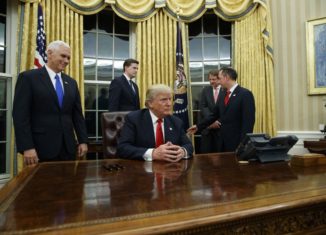 Donald J. Trump was unexpectedly catapulted to the highest office in the land back in November because he railed against Obamacare and promised to beef up the military; he’s now begun to turn that campaign rhetoric into reality, for better or for worse. With the introduction of the American Health Care Act and Trump’s budget for 2018, the new administration has finally started to implement the long promised change to Washington upon which his run to the White House was based.

Despite the advancement of Trump’s agenda, it would be foolish to call the American Health Care Act and the budget seamless, easy fixes. Veteran Republican Senator Lindsey Graham has called Trump’s budget “dead on arrival” in Congress; the new budget aims to counterbalance a 54 billion dollar increase in military spending by completely eliminating nearly 50 federal agencies and programs, including the National Endowment for the Humanities, the Institute of Museum and Library Services, the NASA Office of Education, and the Minority Business Development Agency, just to name a few. Furthermore, Trump’s plan proposes to cut both the Environmental Protection Agency and the State Department by 30%. Onto healthcare, a poll conducted by Public Policy Polling found that only 24 percent of voters support the new healthcare plan. The only block that hates the plan more than the voters is actually the Republican Party as Republicans find themselves split over the new proposal. While the far right labels the bill “Obamacare lite,” more moderate Republicans are worried about the cuts to Medicaid, projected drop in the overall insured rate, and the proposal to defund Planned Parenthood. Republicans have good reason to be worried as the nonpartisan Congressional Budget Office found that the proposal, if voted into action, would result in 24 million fewer Americans having insurance in the next decade.

Both the budget and the American Health Care Act are flawed proposals which are a direct product of the pressure on the Trump Team to bring about immediate change. It would be better for Trump to take his time and work through a health care plan and a budget that will yield positive change for the American people. Though, truly, it would be best to continue to fund educational services, protect the environment, and ensure our ability to engage diplomatically, while also ensuring that Americans with preexisting conditions maintain their legal access to healthcare and prioritize that as many Americans as possible have healthcare, and not vice versa, these are uncertain times regarding the continuance of all of the above. I would urge President Trump and the Republican Congress to proceed with caution, as the “mandate” that was given to them by the voters in November can just as easily be stripped away.