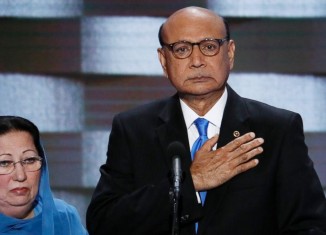 Khizr Khan’s speech at the Democratic Convention was the story of the summer for a reason; it was bigger than politics and arguably more important than the election itself. In detailing the heroism of his fallen son and forcefully defending the founding ideals of our very nation, Mr. Khan reminded us all what it means to be a true American.

Khizr Khan’s son, Humayun, was born in the United Arab Emirates and moved to Maryland when he was two years old. After graduating from the University of Virginia, Humayun joined the army and achieved the rank of Captain. On June 8th, 2004, a suspicious vehicle pulled up to Kahn’s post, and he ordered all of his fellow soldiers to retreat. As he moved in to investigate, the vehicle exploded.

Khizr Khan, who emigrated from Pakistan to the United States in 1980 and put himself through Harvard Law School, spoke in direct opposition to Donald Trump’s proposed ban on Muslim immigration to the United States. Khan captivated the convention as he brazenly wagged a pocket copy of the U.S. Constitution and spoke about the importance of liberty and equal protection of the law. He implored the Republican Nominee to “go look at the graves of the brave patriots who died defending America” at Arlington Cemetery and begged to know if Mr. Trump had ever even read the U.S. Constitution himself.

Though the scathing speech certainly put the Trump Campaign in a precarious position, it was Mr. Trump’s own response that appears to have caused it to sink. By insinuating that Ghazala Khan, the wife of Khizr and the mother of Humayun, was not permitted to speak due to her practice of Islam and by asserting that his sacrifice of creating jobs was on par to that of the Khan family (especially when considering that Donald Trump himself received 5 draft deferments during the Vietnam War), Mr. Trump effectively dashed his hopes of reaching the White House. It may seem like a Greek Tragedy, a Muslim immigrant denying Donald Trump the Presidency; in reality, it was Donald Trump’s own true colors, which shone through more vividly than ever before in his response to the speech by Khizr Khan, that may bring upon his downfall come November 8th.