You are here
Home > Professional Sports > Better Late Than Never: The 2020 World Series 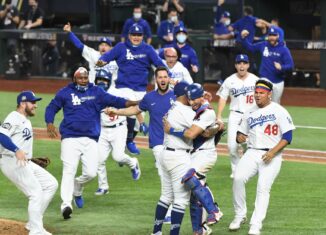 After the seven-game championship series, the 2020 World Series was set: the Dodgers vs the Rays. The Dodgers wanted to end the years of playoff losses and finally win a World Series. Clayton Kershaw, trying to end his years of bad postseason performances, pitched a gem in the first half of the first game, letting up only 2 hits, including a home run. Just as the 5th inning rolled around, the Dodgers heated up scoring 6 unanswered runs. The Dodgers won Game 1 but fell to the Rays in Game 2. The Rays took a 5 to nothing lead by the 5th inning, and the Dodgers hit a handful of home runs to make a slight comeback, but the Rays’ dominant bullpen was able to hold the game and get them a win. With Walker Buehler versus Charlie Morton in Game 3, the Dodgers were able to knock Morton around and jump to a 5 run lead. Buehler, who had 10 strikeouts, along with assistance from the Dodger bullpen, was able to close the game out with a 6-2 win for the Dodgers making the series 2-1. In Game 4, the red hot Urias was able to strike out 9 in 4.2 innings pitched, but the game only became crazier from there. Corey Seager and pinch hitter Joc Peterson were able to go back and forth with a record-setting payoff player in Randy Arozarena who went 3-4. In the bottom of the 9th, Brett Philips played hero with a first and second hit that scored the tying run, but with a misplay in the outfield, Arozarena was able to go for home as he fell tumbling into home. Will Smith misplayed the throw by Muncy, and it got away. The Rays were able to walk it off tying the series 2-2. Kershaw took his second start of the series vs Glasnow in Game 5. Kershaw was not as sharp as his last start but got the job done letting up 2 runs in 5.2 innings pitched. Tyler Glasnow was all over the place like his last start but found a little groove in the end. Unfortunately, it was a little too late as he gave up 3 runs in 2 innings. The Rays got it to a close game, but after a Max Muncy home run, the Dodgers were able to win leaving a tough loss for Rays fans. Going into a must-win Game 6 for the Rays, it was the former Cy Young winner vs a bullpen game from the Dodgers. Snell was striking out 9 in 5.2 innings pitched with only 2 hits and almost having a record-setting game with strikeouts. Analytics coach Kevin Cash took Snell out after only allowing his 2nd hit of the night, leaving watchers confused. His velocity was getting down, but he was only at 73 pitches. Cash said he felt as if Snell gave him everything he had after the game. The Rays offense was unable to get going, and immediately after, Ian Anderson let up 2 runs to take the lead 2-1. A Betts home run in the 8th was able to close out the World Series and finally give the Dodgers a championship after years of falling short. Corey Seager, who is now developing to be one of the top shortstops in the league, won the Series MVP, and Justin Turner and Kershaw were able to celebrate their win after years of defeat.