You are here
Home > Professional Sports > Kristaps Porzingis: The Man No One Saw Coming 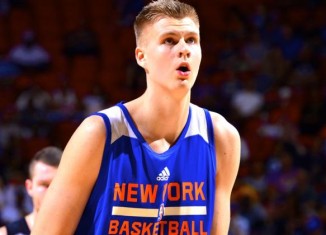 The New York Knicks came away with Kristaps Porzingis as their fourth overall pick in the 2015 draft. No one had heard much off the young Latvian, so no one was surprised when Knick fans erupted in anger over the pick. No one thought much of him other than he was too “European” to be good, “too skinny” to play, and that he would just be another guy in a long list of average players that had been drafted into the NBA. Many news reporters and articles said things such as: “Did the Knicks blow their lottery pick for a nobody?” The majority of people thought that Kristaps Porzingis would never make it in the NBA. Boy, were they wrong.

The preseason was not terrible for Porzingis; however, everyone knew he was just waiting for the real season to begin. And everyone, including him, knew that he had much to prove. On October 28, 2015, the 2015-2016 New York Knicks played their first game against the Milwaukee Bucks. For a first game, Porzingis did not do as bad as everyone was expecting. He put up 16 points and 5 rebounds in the win. His stats were alright for his first couple of games. This was case until November 2, 2015.

On this date, the Knicks were matched up against the San Antonio Spurs. Even though they lost, Porzingis put up 13 points and 14 rebounds. These numbers are extraordinary for a rookie, especially one that is European, as history has proven. Ever since that game, Porzingis has been at the forefront for the Knicks, both on and off the court.

He has been in the media with numerous off-the-glass putbacks and his “NBA Style” clothing. As of now, with Carmelo Anthony not playing to his full potential, Porzingis is one of the best players on the Knicks’ roster. He just may be the missing piece of the puzzle for the Knicks’ organization.

One of his best games happened on November 17, 2015 when the Knicks went up against the Charlotte Hornets. The Hornets, owned by perhaps the greatest basketball player of all time Michael Jordan, have a pretty decent roster with Kemba Walker, Michael Kidd-Gilchrist, and their latest pickup, Frank Kaminsky from Wisconsin. In this game, Porzingis put up an astonishing 29 points and 11 rebounds in the Knicks win. As of now, he is averaging 13.8 points and 9.3 rebounds.

As of right now, Porzingis is the best rookie in the league. Though other top picks, such as Karl Anthony-Towns and D’Angelo Russell, have not been disappointments for their respective teams, Porzingis was not rated as highly as them and is still performing at an exceptional level. Kristaps Porzingis is most likely on his way to the rookie of the year award. Not only is he a kind young man, but he is also a great basketball player and has had many of his putback plays go viral on social media. He can grab as many boards as anyone else and can most certainly “get buckets.” When you’re talking about a guy like this, the only question left is just how far can he go?