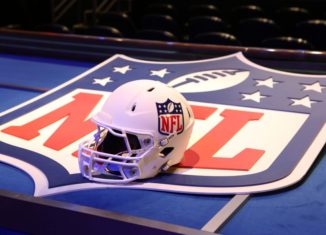 The 2017-18 NFL season was one for the ages. From Week 1 of the regular season to the final seconds of the Super Bowl, this year had all the excitement any football fan could hope for. There were many surprises in the regular season, such as the Jacksonville Jaguars defense and injuries to players such as Aaron Rodgers, Odell Beckham Jr., and JJ Watt. There were also many historic moments such as the “Minneapolis Miracle” game-winning touchdown for the Vikings and the Eagles “underdog road” throughout the playoffs. And, most importantly, Super Bowl LII saw the Eagles upset Tom Brady and the Patriots, 41-33.

The 2017-2018 season was full of exciting and action-packed games. The most memorable game of the regular season was the Patriots vs the Steelers in Week 15. The result of this game would decide who would become the number one seed in the AFC. The Steelers were winning 24-16 at the start the 4th quarter. With four minutes left in regulation, the Patriots kicked a field goal to make the score 24-19. The Patriots scored a touchdown again with under a minute left in regulation to take the lead and make the score 27-24. The Steelers then had possession and drove the ball down the field to the Patriots ten-yard line. Quarterback Ben Roethlisberger threw the ball to tight end Jesse James in between the one-yard line and the endzone. The call on the field was a touchdown. However, the replay made the refs overturn the call and call it an incomplete pass. The next play, Roethlisberger threw an interception and the Patriots won the game 27-24. This call was so controversial that NFL fans still talk about today.

The NFL Playoffs also included some games that will be talked about for a while: Patriots vs. Jaguars, Titans vs. Chiefs, and of course, Vikings vs. Saints. The Titans were able to comeback from a 21-3 deficit to a 22-21 win against the Chiefs in the Wild Card round. The defensive-powered Jaguars held the Patriots to 10 points as they were winning 20-10 with 10 minutes left in regulation. The Patriots came back to win 24-20 after two touchdowns by Danny Amendola and advanced to the Super Bowl. Although these games were great, they were not as memorable as the Vikings vs Saints. The Saints came back from a 17-0 deficit to a 24-23 lead with 25 seconds left in regulation. The Vikings had the ball with about 10 seconds left. Quarterback Case Keenum threw it to wide receiver Stefon Diggs, who escaped a missed tackle by Saints safety Marcus Williams and ran it in for 61 yards as time expired to lead to a 29-24 victory. This became known as the “Minneapolis Miracle.”

Super Bowl LII (52) was one that fans will remember for a very long time. The underdog Philadelphia Eagles battled against Tom Brady and the New England Patriots as the game was back and forth up until the final whistle. This game featured Nick Foles, the backup for superstar Carson Wentz during the regular season. This game was expected to be a low to medium scoring game due to the Eagles outstanding defense. However, the game featured many broken records. Some records broken were the most combined yards (1,151) and most passing yards in a postseason game (505-Tom Brady). During the game, there were two plays that will go down in history. In the second quarter, Brady dropped a pass as he was wide open. This would become a huge meme on social media. The other play happened late in the second quarter on 4th down and goal. Backup Tight End Trey Burton threw the ball to Quarterback Nick Foles for a one-yard touchdown. This play was known as the “Philly Special”. The Eagles went on to win 41-33 for their first ever Super Bowl victory.

As we gear up for next season, NFL Free Agency has been wild so far. Arguably the best cornerback in the NFL, Richard Sherman, signed with the 49ers. The Packers signed tight end Jimmy Graham, while the Rams signed Ndamukong Suh, Marcus Peters, Aqib Talib, and Brandin Cooks. However, no team has had an offseason quite like the Cleveland Browns. The Cleveland Browns have been very active this offseason as they have signed notable players such as Tyrod Taylor, Jarvis Landry, Carlos Hyde, and Damarious Randall.

This all leads us to one of the most highly anticipated professional sports drafts in years. For the past few years, everyone knew who was going to be picked first overall in this year’s NFL draft. For example, last year, everyone knew that Myles Garrett was going first overall to the Cleveland Browns. This year, the Browns had not only the first pick but also the fourth overall pick. It was very likely that the Browns would take either USC quarterback Sam Darnold or Penn State running back Saquon Barkley. Much to everyone’s surprise, the Browns didn’t pick either of them! Instead, they chose the 2017-18 season Heisman Trophy winner Baker Mayfield. Needless to say, fans were shocked by this pick. The NY Giants had the next pick, and they weren’t looking for a quarterback to draft, like Sam Darnold, so they decided to draft Saquon Barkley who many believe will have the best career when compared to the rest of the athletes in the draft. The NY Jets had the third pick, and they were looking for a quarterback. Thus, the Jets got Sam Darnold. Two other quarterbacks were drafted within the first ten picks: Josh Allen from Wyoming went to the Bills, and Josh Rosen from UCLA went to the Cardinals.

And the draft did not end there as one more quarterback was drafted in the first round. His name is Lamar Jackson, and he was drafted by the Baltimore Ravens with the last pick (32nd overall) pick in the first round. Jackson went to Louisville and won the Heisman trophy in the 2016-17 season. During his Heisman campaign, he broke many records for touchdowns and rushing yards in games. Lamar Jackson is a dual-threat quarterback who also runs the ball. In fact, Jackson ran the ball more times than he completed his passes throughout his collegiate career. During the NFL Combine, Jackson was asked to do receiver drills as a result of his speed from the number of times that he ran the ball. In my opinion, Lamar Jackson will either be terrible because he may not be able to run or pass against players much better than those in college, or he will change the game by being an outstanding dual-threat quarterback in the NFL.

The 2018-2019 NFL Season officially kicks off on September 6, 2018. The Thursday Night Kickoff is between the 2016-17 NFC champion Atlanta Falcons and the reigning Super Bowl champion Philadelphia Eagles. For the upcoming season, we will hopefully get to witness records being shattered, breakout stars, new and improved rosters, and more jaw-dropping moments as we’ve come to expect from the NFL.