You are here
Home > Professional Sports > Super Bowl Recap: Tom Brady and the Bucs on Top 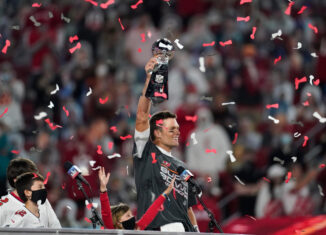 The NFL’s 55th Super Bowl was an entertaining and memorable matchup between the Kansas City Chiefs, led by Patrick Mahomes, and the Tampa Bay Buccaneers, led by Tom Brady. Coincidentally, this was the first time a Superbowl team played, and went on to win, in their home stadium. A matchup between legend and longtime quarterback, Tom Brady, against the young rising star, Pat Mahomes, created much anticipation in the weeks leading up to the big event. Despite the 18 year age difference between these two quarterbacks, both of their talents are admired by all football fans across the country. The Chiefs beat the Bucs in a regular-season game earlier this year, and the Bucs were prepared to make a comeback. In the end, Tampa Bay’s team, led by Tom Brady, was victorious in the 55th Super Bowl.

The Bucs offense started the game after the Chiefs won the coin toss and chose to defer. Both teams remained scoreless after a few drives until Kansas City was first to put points on the board with a field goal. Things began to heat up when Brady threw a touchdown to his longtime teammate, Rob Gronkowski. Even on a different team, this dynamic duo seems unstoppable and continues to score touchdowns! After the first quarter, the Bucs lead 7-3.

In the second quarter, Brady and Gronk came around again to score another touchdown, moving the score to 14-3. At this point, it was evident that Mahomes was having trouble moving the ball against the talented Bucs defense. As time started to run out as half-time approached, Chiefs player Butker kicked a field goal, now making it 14-6. Just before halftime, the Bucs were able to score yet another touchdown, extending their lead to 21-6. During halftime, as fans took a break from football and were given the chance to enjoy a live music performance for the first time in almost a year, The Weeknd put on an entertaining and lively performance. His backup dancers and special effects created a unique and entrancing show for fans to watch before the second half of the game began.

At the beginning of the 3rd, the Chiefs were determined to make a comeback. After failing to score a touchdown on the first drive of the 2nd half, the Chiefs made it 21-9 after scoring their 3rd field goal of the night. Leonard Fournette helped out his team by scoring another touchdown for the Bucs, now leading 28-9. Getting nervous and falling far behind in points, Mahomes throws an interception. However, the Bucs remained on fire, kicking a field goal to make it 31-9!

Rolling over into the 4th quarter, Mahomes and the Chiefs continued to play their hearts out. The fight didn’t stop, and Mahomes continued to throw passes despite the amazing performance of the Bucs defense throughout the entirety of the game. The Bucs focused on continuing to run out the clock and holding on to their dominant lead. To add some humor into the game, a fan surprisingly and randomly ran onto the field during the 4th quarter surprising all in attendance and all watching from home! Once he was escorted off the field by security, the end of the game rapidly approached. It looked like Kansas City might finally score a touchdown, until a pass from Mahomes was intercepted in the endzone by the Bucs, sealing their victory. Both teams played and fought hard, but Tom Brady and the dominant Buccaneers came out on top as this year’s Super Bowl champs winning 31-9!