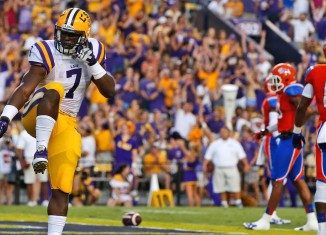 Bo Jackson, Herschel Walker, Reggie Bush, Ricky Williams,Tony Dorsett, and Barry Sanders: these six men are considered by many to be the best five running backs to ever step onto a college football field. There is currently one more man who is about to join that prestigious group of running backs. His name is Leonard Fournette. Fournette has become somewhat of a myth throughout this college football season, creating a highlight every time he touches the ball; but, the road to stardom has not always been such a breeze for Fournette.

Growing up in the 7th Ward of New Orleans, life was not always pleasant for Fournette. The 7th Ward of New Orleans is an area with an abundance of crime and poverty. Fournette fell asleep to gunshots and sirens almost every night. In 2005, when Hurricane Katrina obliterated the city of New Orleans, Fournette and his family were forced to uproot and seek shelter elsewhere for close to a year. The whole ward was flooded, and it was in no state to be inhabited. To this day, many portions of the area have not returned to their original states. Through it all, the one thing that kept Fournette going was football.

Fournette began playing football at a very young age and quickly began to dominate in the Pop Warner league. In fact, he was so good that the NFL’s Tyrann Mathieu, Fournette’s childhood friend, claimed that parents of other children in the league asked that Fournette not participate because he was so dominant. While he dominated on the field, Fournette struggled daily as a child with a seemingly irreparable stutter. Fournette’s mother was worried that if he did end up becoming an NFL player, he would need to learn how to speak in public. Every night, Fournette would stand in front of the mirror in his room and practice speaking. Despite this additional setback, Fournette revealed the drive and determination necessary to aspire to greatness in every aspect of life.

After his Pop Warner years, Fournette went on to attend St. Augustine High School. At St. Augustine, Fournette ran track and played football. Fournette was a force to be reckoned with in every single activity in which he participated. He set the regional record for the 200 meter, and he also competed in the 4×200 relay. On the football field, Fournette continued to shine. He started on the varsity team at running back for all four years at St. Augustine. During that four-year span, Fournette rushed for 7,619 rushing yards and 88 touchdowns. Going into his senior season, Fournette was the #1 ranked recruit in the country. Every major college football program wanted Fournette to come play for their school.  At the conclusion of his senior season, Fournette was named Louisiana’s Mr. Football and was selected as an All-American by USA today. At the Under Armour All-American game in December of 2013, Fournette announced his decision to play college football at his hometown school of LSU.

Going into his freshman season at LSU, Fournette was compared to all-time greats, such as Minnesota Vikings running back Adrian Peterson. However, the hype quickly vanished after Fournette only managed to get 18 yards on 8 carries in his opening game against Wisconsin. LSU coach Les Miles’ plan for Fournette was to make sure he did not let all the hype get to his head. By only giving Fournette 8 carries in his debut, Miles made that clear. The next few weeks went the same way. Fournette did not receive many carries and did not produce. Finally, in a game against rival Florida, Miles let Fournette loose. Fournette rushed the ball 27 times for 144 yards and two touchdowns in LSU’s win against Florida in the swamp. Fournette continued his stellar play against Ole Miss, who had the nation’s #3 run defense. He rushed for 113 yards and led LSU to victory. Fournette proved to everyone that he was ready to live up to his potential.

In the summer between his freshman and sophomore season, Fournette dedicated his time to getting stronger and faster. Fournette worked for countless hours each day in the humid New Orleans weather to improve everything about his game. He gained almost 15 pounds of pure muscle in the offseason and went into his sophomore season weighing 240 pounds. Once again, there was hype going into the season, but not nearly as much as the season before. Fournette sprinted out of the gate in his first game of the season when he ran for 159 yards and had 3 touchdowns against Mississippi State. LSU only won that game by 2 points, and Fournette was not pleased. He stated, “No one was happy; it was not supposed to be this close.”

This season, Fournette’s attitude is different. He wants to do what is best for his team, not necessarily what is best for himself. His coach, Les Miles, praised him for his attitude after the opening game when he said, “Leonard is a humble man; he works hard at his trade, and he is a fine teammate.” Fournette has continued his torrid start to the season by accumulating at least 150 yards on the ground in each of his first seven games.

However, the Tigers have an extremely tough task ahead of them. LSU has to go to Tuscaloosa and play against  Alabama. Alabama is the #4 ranked team in the country, and their lone loss came to a very talented Ole Miss team. Alabama has shown extreme praise for what Fournette has been doing to start the season. For example, Alabama coach Nick Saban has said that “Leonard is the most dominant force in college football.”  If LSU wants to come out of Tuscaloosa with a victory, Leonard Fournette needs to shine like he has this entire season thus far.