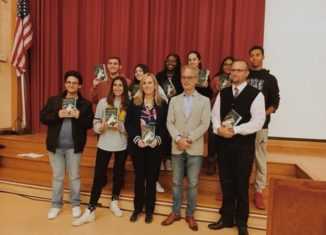 Early this November, High School East’s Honors College English students were presented with a rare academic opportunity. After reading and studying New York Times bestselling novel Rules of Civility in class, a student reached out to the author, Amor Towles. Towles, who graduated from Yale, received an MA in English from Stanford University, and published this novel (his first), in 2011, surprised even teachers Miss Hogan and Mr. Zarzicki, who have been teaching Rules of Civility as part of the College English curriculum for the past four years, by agreeing to come in from his home in Manhattan to visit High School East and discuss his book with students.

While this was an unlikely event to happen, Towles’ willingness to talk to us makes sense; he eventually informed everyone that he never thought of his novel from an academic standpoint. College English students and their teachers hypothesized that Towles was intrigued to understand why his book, being more modernly written than anything we have read in the past four years, was chosen to teach to high schoolers. Rules of Civility presents the story of young woman named Katey Kontent living in 1938, the year in which her life was transformed by people she met, and encompasses themes of social strata and fate vs. free will.

Our discussion with Amor Towles took the form of a two-hour in-school field trip held in High School East’s Lecture Hall. This allotted time for Mr. Towles to give us some background on his writing and his career before we asked questions and further discussed the novel that we had been studying for nearly two months. We were informed that Rules of Civility was not actually his first attempt at writing a novel; in fact, he scrapped an entire other novel that he had previously written because he wanted to be able to write something on a more concise schedule. He then shared a slideshow containing numerous works of art that he says inspired him in the beginning of the novel writing process. Many of the paintings, including Automat by Edward Hopper, displayed a woman sitting across from an empty chair with her face out of focus. This could be said to have influenced Katey’s character, a fairly independent lower middle class woman trying to survive economically and socially in 1930s New York.

Towles began to understand the purpose of his book in an academic setting once we started our Q&A formatted discussion. Many of the questions asked all resulted in a similar understanding of “Did you mean to do this?” Rules of Civility is a novel built on allusions used to expose its setting. However, in our English classes, these allusions came up repeatedly in discussions as symbols. We inferred that many allusions were made in order to symbolize traits of certain characters. However, when asked by multiple students if he had set these allusions up intentionally, Towles denied it. It was then that we all realized the purpose of his novel in our classroom; we had been building inferential reading skills. We came to conclusions about Towles’s writing that could be proven and therefore were legitimate, but that he may not have done intentionally. This realization showed us how much reading Rules of Civility and studying a great author’s writing style really taught us.

Overall, this was an incredible and exciting experience. Opportunities to discuss an amazing book with its author do not come frequently, especially to high school students, and we are all so thankful to Amor Towles for taking the time to do this. Both teachers even stated that this has been a highlight of their academic careers.