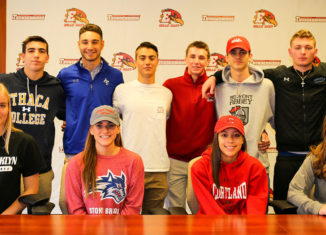 For high school athletes, signing day is one of the most important days of their senior year. It marks their official commitment to the school of their choice, as well as the beginning of their collegiate career, as both students and athletes. This year, on Wednesday, November 15th, High School East was proud to have twelve student-athletes commit to college for their respective sports. Dr. Strong had this to say about Signing Day: “It’s an amazing experience to see the level of our student athletes here at High School East. It’s truly a great thing to be a part of.” Listed below are the twelve student-athletes and the schools they will be attending in the fall:

The supreme recognition of talented high school athletes did not stop there. While November 15th was officially dubbed “signing day,” more athletes signed for sports at later dates. On November 21st, Savion Lewis signed with Quinnipiac University for Men’s Basketball (D1). On December 3rd, Jessie Maurer signed with SUNY New Paltz for Women’s Basketball (D3). On December 4th, Nicole Jackson signed with SUNY Brockport for Women’s Gymnastics. High School East is extremely proud of our student athletes and wishes them nothing but the best as they embark on this journey of higher education and athletic competition.