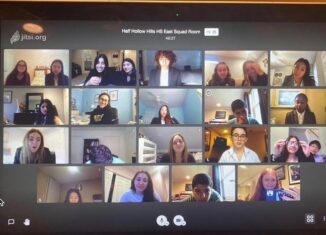 Are you ready to hear some exciting news about the debate team at High School East? Well, get ready because the Speech and Debate Club is one of the most outstanding clubs provided here at HSE, and we recently competed in an online tournament. On Saturday, October 24th, the debate team competed at the LIFA Opening Debate virtually from home. Due to Covid restrictions, this year was done differently than other years; however, it was a great experience for all of us to learn new things. We were luckily able to get the chance to attend a tournament like this.

The Speech and Debate Club is an immense club composed of many different categories students can choose to participate in. I currently participate in the Debate side of the club, and there are two categories that students can choose from: Public Forum Debate or Lincoln Douglas Debate. Public Forum Debate consists of 8 speeches and 3 “crossfires” which is basically cross-examination. It is a two on two event where teams argue against each other on a specific resolution given. In this most recent tournament, Jayden Neidell and Mia Bordwin place 5th in PF Novice, while Emma Blumberg and Alana Zinkin took 3rd place for the Junior Varsity division. Lincoln Douglas Debate is a one on one debate which is focused mainly on competing values. The topic for this tournament was compulsory voting and if it should be enforced in the United States. Placing 1st for HSE in Lincoln Douglas Novice was Jacob Muscolino. Placing first in the Junior Varsity division was Lily Nussbaum with 2nd place going to Sophia Lerebours!

A special congratulations goes out to the High School East Debate team for winning first place overall at the LIFA Opening Debate Tournament! Everyone did a great job at this tournament, and we are all looking forward to more successful debates in the near future.